2019.27.06 Dinner Reception on the Occasion of the Visit to Japan by Afghan Delegation of Upper House Parliamentary Members and Kabul Municipality’s Deputy Mayor.

Dinner Reception on the Occasion of the Visit to Japan by Afghan Delegation of Upper House Parliamentary Members and Kabul Municipality’s Deputy Mayor. 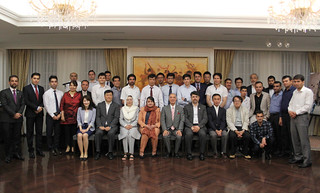 June 27, 2019: It was a pleasure for H.E. Ambassador Dr. Bashir Mohabbat to host a dinner reception in honor of the Visit to Japan by Afghan Delegation of Upper House Parliamentary Members Hon. Ms. Fatima Akbari , Hon. Ms. Nabia Mustafazada, and Dr. Sadruddin Tajik, Kabul Municipality’s Deputy Mayor, at the Embassy’s Rumi Balkhi Hall. All of the Diplomats and staff were present to receive the honored guests for the evening’s festivities. 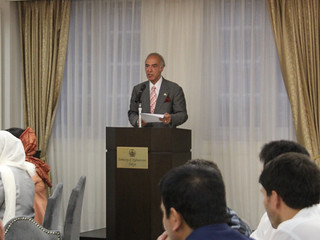 The evening’s Emcee Mr. AbdulHameed Hashimi, Third Secretary, welcomed each speaker to give their remarks. H.E. Ambassador Dr. Mohabbat first began by thanking the people and Government of the noble nation of Japan for their most benevolent and gracious support over the years in the redevelopment of Afghanistan. Further in his speech he highlighted the wonderful projects of infrastructural development and civil works Japan’s governmental agencies such as JICA have aided with. This was followed by remarks from Dr. Sadruddin Tajik, Deputy Mayor of Kabul Municipality who remarked on the beautification and development Kabul Municipality has undertaken. 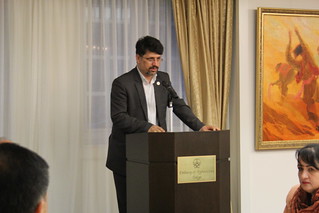 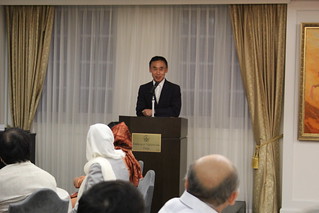 Remarks were also given by Mr. Toshiyuki Iwama, Representative of the JICA Kabul Office who spoke on the magnificent collaboration and partnership between the two nations of Afghanistan and Japan in bringing projects to fruition. This was followed by remarks from Mr. Toru Hashimoto, Executive Director of the Development Cooperation of Yokohama City who likened the symbiotic sharing’s enduring heritage to the old adage, “You can give a man to fish and he will eat for a day. You can teach a man to fish and he can eat for a lifetime.” 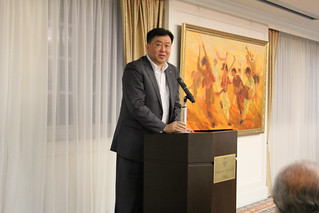 Following all of the remarks and a group photo to commemorate the event, guests were invited to dine on traditional Afghan cuisine which was prepared by the Embassy in honor of the guests’ visit. 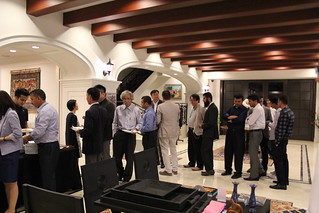 Dinner Reception on the Occasion of the Visit to Japan by Afghan Delegation of Upper House Parliamentary Members and Kabul Municipality’s Deputy Mayor.
Posted by AEJ at 18:00