Attendance at Iftar Dinner Hosted by H.E. the Prime Minister of Japan. 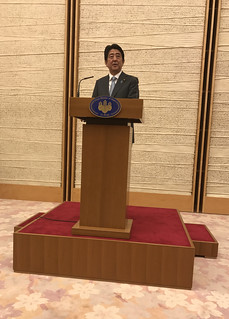 June 3, 2019: H.E. Ambassador Dr. Bashir Mohabbat had the honor and pleasure of attending the special Iftar celebration dinner hosted by H.E. Mr. Shinzo Abe, Prime Minister of Japan, at the Grand Hall of the Prime Minister’s Office in Tokyo. All ambassadors and Chargé d'affaires from embassies of Islamic countries were invited to the Prime Minister's office for the dinner reception breaking of the fast during the holy month of Ramadan. 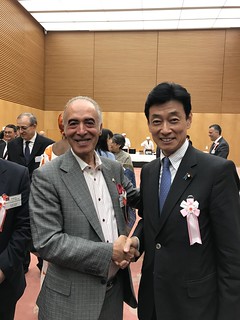 H.E. Ambassador Dr. Mohabbat had the honor of meeting and speaking once again with H.E. Prime Minister Abe to whom he expressed sincerest thanks and appreciation on behalf of the people and Government of the Islamic Republic of Afghanistan for Japan’s steadfast and benevolent support over the years. In return, H.E. Prime Minister Abe thanked H.E. Dr. Mohabbat for his kind words and assured him that Japan would continue to stand with Afghanistan well into the future as it strives for progress, prosperity, and peace in an Afghan-owned and Afghan-led process.
While at the event, H.E. Dr. Mohabbat had the opportunity to meet with Hon. Mr Yasutoshi Nishimura, Deputy Chief Cabinet Secretary of Japan, to whom he expressed sincerest appreciation for Japan's continuous support to Afghanistan over the years which has been so vital to its development and improving the lives of the Afghan people. Additionally he had the pleasure of meeting with others of Their Excellencies the Ambassadors from Islamic countries, Chargé d'affaires, and other distinguished guests invited by H.E. Prime Minister Abe to partake in the breaking of the fast and sharing of an Iftar meal.

Attendance at Iftar Dinner Hosted by H.E. the Prime Minister of Japan.
Posted by AEJ at 13:39