2019.19.06 Reception Honoring the 121st Anniversary of the Proclamation of Philippine Independence.

Reception Honoring the 121st Anniversary of the Proclamation of Philippine Independence. 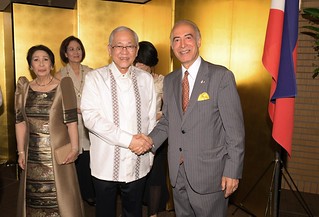 June 19, 2019: It was an honor for H.E. Ambassador Dr. Bashir Mohabbat in his capacity as non-Resident Ambassador of Afghanistan to the Republic of the Philippines, to attend the 121st Anniversary of the Proclamation of Philippine Independence at Imperial Hotel in Tokyo, Japan. 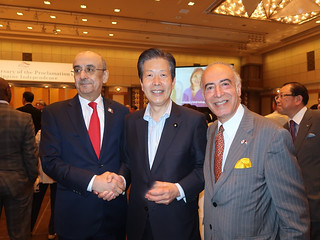 On behalf of the people and Government of Islamic Republic of Afghanistan, H.E. Ambassador Dr. Mohabbat expressed his sincerest congratulations on this most auspicious occasion to H.E. Mr. Jose Castillo Laurel V., Ambassador of the Philippines. Moreover, he thanked the people and Government of the Philippines for their generous support over the years as Afghanistan has striven for development, prosperity, and peace in an Afghan-owned and Afghan-led process. In return, H.E. Mr. Jose Castillo Laurel V. thanked Dr. Mohabbat for his attendance and kind words and wished for the continuation of profound relations between Afghanistan and the Philippines well into the future.
While at the reception, H.E. Dr. Mohabbat also had the pleasure of meeting and speaking with longtime friend of Afghanistan and himself, Chief Representative of the Komei Party and Member of the House of Councilors of Japan, H.E. Mr. Natsuo Yamaguchi, as well as H.E. Mr. Hassan Bin Mohammed Rafei Al-Emadi Ambassador of the State of Qatar to Japan, and several of Their Excellencies the Ambassadors, Diplomats with missions in Japan, and high ranking members of several Governments all present in honor of the most auspicious occasion.

Reception Honoring the 121st Anniversary of the Proclamation of Philippine Independence.
Posted by AEJ at 14:56