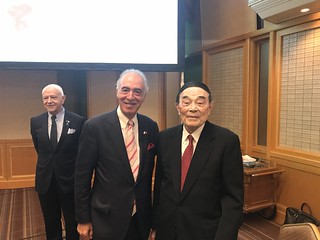 June 18, 2019: It was a pleasure for H.E. Ambassador Dr. Bashir Mohabbat to attend the 36th Founding Anniversary annual Members Gathering of the NPO the International Friendship Exchange Council (FEC) at the Imperial Hotel in Tokyo, Japan. 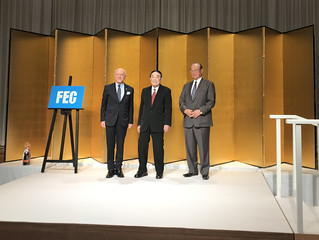 H.E. Ambassador Dr. Mohabbat met with one of the hosts for the evening, the Hon. Dr. Chihiro Kanagawa, Chairman of Shin-Etsu Chemical Co. Ltd. and Chairman of the the FEC, whom he congratulated on the 36th anniversary of the foundation of FEC as well as thanked for the invitation to the event and the opportunity to further enhance Japan and Afghanistan relations. Further, and on behalf of the people and Government of the Islamic Republic of Afghanistan, he thanked the noble people and Government of Japan for their steadfast and benevolent support of Afghanistan over the years as they have striven for development, prosperity, and peace in an Afghan-owned and Afghan-led process. In return, Hon Dr. Kanagawa thanked H.E. Dr. Mohabbat for his attendance and his kind words assuring him that the FEC would do all to help continue friendship and support to Afghanistan so it can continue its peace process.
The gathering was held for the purpose of strengthening international relationships between Japan and foreign dignitaries. While at the event, H.E. Dr. Mohabbat had the opportunity to meet with H.E. Ambassador Mr. Manlio Cadelo, Ambassador of the Republic of San Marino to Japan and Dean of the Diplomatic Corps in Japan, in addition to several of Their Excellencies the Ambassadors, diplomats with missions in Japan, dignitaries from Japan’s political and business sectors, as well as other distinguished guests all present to partake in the networking opportunity.