2019.12.06 Attendance at the Annual General Assembly for 2019 of the Overseas Construction Association of Japan, Inc. (OCAJI).

Attendance at the Annual General Assembly for 2019 of the Overseas Construction Association of Japan, Inc. (OCAJI). 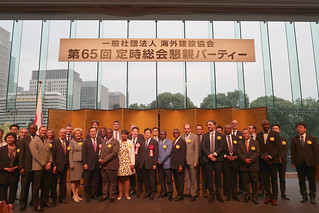 June 12, 2019: H.E. Ambassador Dr. Bashir Mohabbat had the pleasure of attending the Annual General Assembly for 2019 of the Overseas Construction Association of Japan, Inc. (OCAJI) at the Palace Hotel in Tokyo. 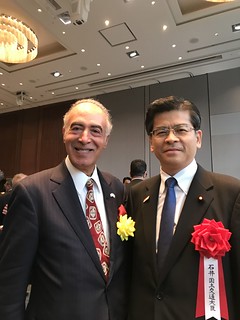 On behalf of the people and Government of the Islamic Republic of Afghanistan, H.E. Ambassador Dr. Mohabbat sincerely thanked the H.E. Mr. Keiichi Ishii, Minister of Land, Infrastructure, Transport and Tourism as well as Minister in charge of Water Cycle Policy, for the invitation to the event and for the assistance to Afghanistan’s development by the friendly and noble nation of Japan through organizations such as OCAJI across many facets which has been vital towards improving the livelihoods of Afghans and bolstering the economy. In return, H.E. Minister Ishii told Dr. Mohabbat that Japan would do its best to increase support to Afghanistan for further development in the future. H.E. Dr. Mohabbat and H.E. Minister Ishii further discussed the present and future plans of construction in Afghanistan would benefit greatly from continued Japanese construction and development and be mutually beneficial. 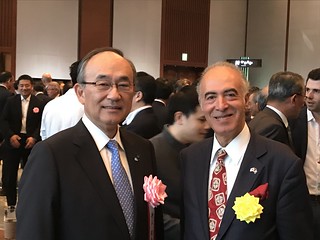 While at the event, H.E. Dr. Mohabbat also had the honor of meeting and speaking with the Hon. Mr. Kazuyuki Inoue, Vice President of OCAJI as well as the President of the Shimizu Corporation, in addition to others of Their Excellencies, Heads of Missions, Diplomats with missions in Japan, members of parliament, leading business people, and other dignified guests all present in honor of the annual General Assembly reception for OCAJI.

Attendance at the Annual General Assembly for 2019 of the Overseas Construction Association of Japan, Inc. (OCAJI).
Posted by AEJ at 13:47