2018. 25. 09 Attendance at Reception to Celebrate National Day of the Kingdom of Saudi Arabia.

Attendance at Reception to Celebrate National Day of the Kingdom of Saudi Arabia. 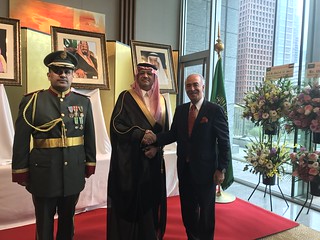 September 25, 2018: His Excellency Ambassador Dr. Bashir Mohabbat had the pleasure and honor of attending a reception to celebrate the 88th National Day of the Kingdom of Saudi Arabia hosted by Mr. Mohammed Fuad N. Justaniah, Chargé d'Affaires ad interim.
H.E. Ambassador Dr. Mohabbat took the opportunity to extend his deepest gratitude, on behalf of the people and Government of the Islamic Republic Afghanistan, to the Kingdom and H.M., through Mr. Mohammed Fuad N. Justaniah, to wish sincerest congratulations on this most auspicious day. As Saudi Arabia has lent generous and significant support as well as regional cooperation to Afghanistan in the peace process over the years, and serves as a beacon for the Islamic world holding custodianship of the Two Holy Mosques, H.E. Dr. Mohabbat further conveyed his hope that the Kingdom would see another year of peace and prosperity, his wishes for the welfare of the people of the country, and his desire that the two nations would continue grow closer. In return, Mr. Justaniah thanked H.E. Dr. Mohabbat for his words and attendance at their National Day celebration in addition to his hopes for continued national cooperation. 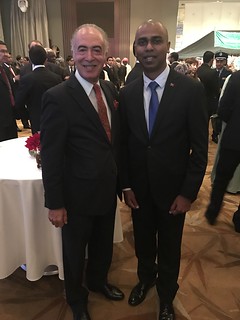 At the reception, H.E. Dr. Mohabbat also had the opportunity to meet and converse with Hon. Mr. Takeo Kawamura, Member of the House of Representatives, President of the Japan-Saudi Arabia Parliamentary League of Friendship, to whom he extended his sincerest thank, on behalf of the people and Government of the Islamic Republic of Afghanistan, for Japan’s steadfast and benevolent support over the years. Additionally he met with many high ranking Japanese officials, several of Their Excellencies Ambassadors, and members of diplomatic missions stationed in Tokyo with who were in attendance of the auspicious event. 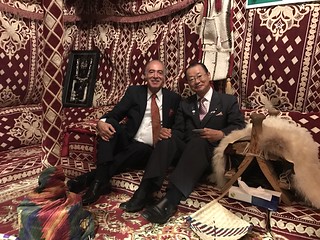