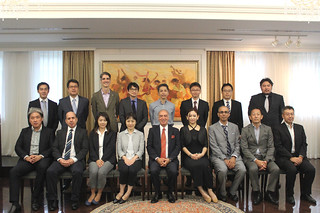 September 26, 2018: H.E. Ambassador Dr. Bashir Mohabbat had the pleasure of hosting a luncheon meeting at the embassy for several representatives from various entertainment and media related sources in Japan such as Fuji TV, TBS TV, NHK, TV Asahi, Nihon TV, Star Three Corporation, Shotstri Corporation, and Action Corporation. Also in attendance were all of the diplomats and staff of the Embassy of the Islamic Republic of Afghanistan in Japan. 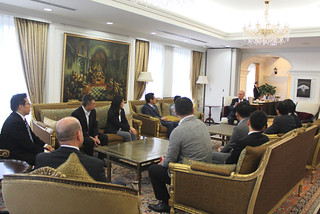 In his greeting remarks to the guests, H.E. Ambassador Dr. Mohabbat expressed his sincerest thanks to all of those in attendance and remarked on the gratefulness for such a unique opportunity in reaching out to the media and welcoming them into them Embassy as guests where they appreciate firsthand the good feeling of Afghan hospitality, culture and cuisine in a warm setting. H.E. Dr. Mohabbat added his wishes for continued good relations and collaborations among those present to continue to show the warm side of Afghanistan’s rich culture and history to Japanese audiences well into the future. Moreover, he reiterated his sincerest and most heartfelt thanks on behalf of the people and Government of Afghanistan, to the people and Government of Japan for their benevolent assistance, tireless support, and interest in establishing peace and prosperity for Afghanistan. 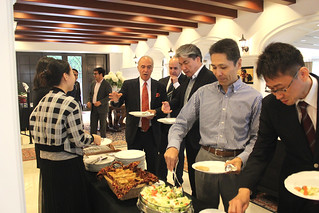 Following the meeting, he invited the guests to partake in the Afghan dishes prepared in honor of the visit by the embassy. At the conclusion of lunch, the guests were given a grand tour of the embassy grounds. All of those in attendance met in a very amicable environment and were able to discuss various topics that could potentially serve to help bridge the gap in understanding of Afghanistan’s culture to a Japanese audience. Moreover, the Media and Entertainment representatives expressed their appreciation for the attention given to them along with the new things learned about Afghanistan and thus promised to bring the many positive sides of Afghanistan's history, culture, and progress -often overlooked- into more prominent coverage for Japanese audiences in the future. 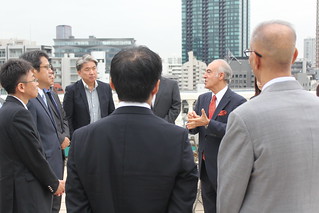