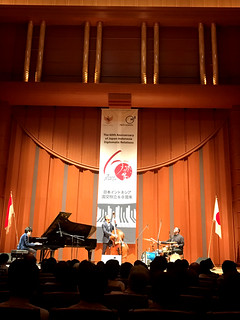 September 25, 2018: It was a pleasure for H.E. Ambassador Dr. Bashir Mohabbat to attend a special concert honoring the 60th anniversary of Indonesia-Japan Diplomatic Relations, entitled “A Jazz Evening” featuring the Joey Alexander Trio at the Kioi Hall in Tokyo.
On behalf of the people and Government of the Islamic Republic of Afghanistan, H.E. Ambassador Dr. Mohabbat extended his congratulations for the auspicious milestone event and stupendous concert to H.E. Mr. Arifin Tasrif, Ambassador of the Republic of Indonesia to Japan. As Indonesia has continued to express commitment to support and assist the rebuilding Afghanistan in various sectors, including technical training infrastructure, women’s empowerment, higher education, and diplomat training, H.E. Dr. Mohabbat conveyed his hope for the continued welfare of the Indonesian people, peace and prosperity of the Republic, and his desire to foster stronger relations between the two great nations. In return, H.E. Ambassador Mr. Tasrif thanked H.E. Dr. Mohabbat for attending the special concert as well as for his kind words. He further expressed his wishes that their two nations and embassies would grow even stronger ties.
Also while at the event, H.E. Dr. Mohabbat had the pleasure of meeting and speaking with several of Their Excellencies the Ambassadors, diplomats with missions in Japan, members of Japanese government, and other distinguished guests.