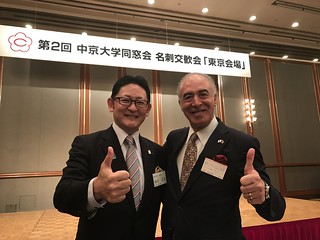 September 15, 2017: It was a pleasure for H.E. Ambassador Dr. Bashir Mohabbat to attend the “Networking Event” reception celebration by Alumni of Chukyo University at the Shinagawa Prince Hotel in Tokyo. 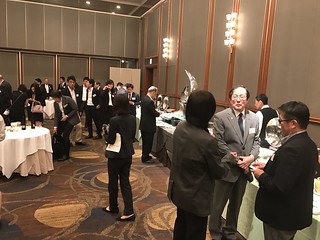 As an alumnus of Chukyo University, H.E. Ambassador Dr. Mohabbat was again invited to the reception. The university, established 64 years ago, initially had only one department – Commerce. But currently has 11 undergraduate departments and 11 graduate level research courses, including professional schools of law and business. H.E. Dr. Mohabbat had the pleasure to meet with Dr. Kiyohide Umemura, Chancellor Chairman of Chukyo University to whom he extended his thanks to for hosting the successful event. He thanked the event planner for his kind and very thorough welcoming and the care he received when he was student at Chukyo as the first foreign student of the university. Moreover, he intimated just how proud he was of the invaluable education he received for the institution that holds so dear a place in his heart, which through their all-encompassing, high-caliber training he is certain it helped to bring him to where he is in life. In return, Dr. Uemura thanked him for his attendance and for giving his kind words, further remarking how proud they were of H.E. Dr. Mohabbat as the university’s first Ambassador Alumnus. While at the event, H.E. Dr. Mohabbat also had the pleasure of speaking with many of his fellow alumni of the university who were in attendance to network with former classmates at the event.