2018. 27. 09 Attendance at the Reception for the 40th Anniversary of the China-Japan Friendship Agreement.

Attendance at the Reception for the 40th Anniversary of the China-Japan Friendship Agreement. 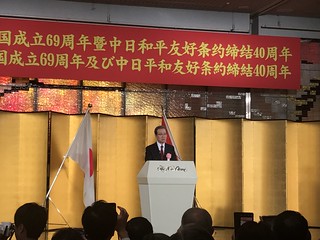 September 27, 2017: His Excellency Dr. Basir Mohabbat, Ambassador at the Islamic Republic of Afghanistan in Japan, had the pleasure of attending the reception on the occasion of the 40th Anniversary of China-Japan Friendship Agreement, at the Hotel New Otani.
On behalf of the people and the Government of the Islamic Republic of Afghanistan, H.E. Ambassador Dr. Mohabbat congratulated His Excellency Ambassador Mr. Cheng Yonghua on the occasion. Further he expressed the appreciation for China’s cooperation in the redevelopment of Afghanistan as well as his wishes for the wellbeing of the people and Government of China, their neighboring country. In return, H.E. Ambassador Mr. Cheng expressed his thanks for H.E. Dr. Mohabbat’s attendance and kind words. Moreover, H.E. Mr. Cheng added his wishes for the people and Government of Afghanistan as well as for the maintenance of amicable ties between their respective countries and embassies.
While at the reception, H.E. Dr. Mohabbat had the pleasure of meeting and speaking with several of Their Excellencies the Ambassadors, diplomats with missions in Japan, members of parliament, and other dignified guests all of who were delighted to join in celebrating the auspicious occasion.