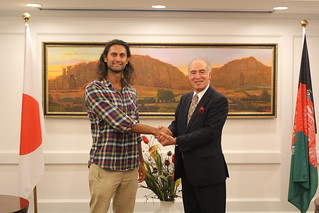 September 28, 2018: It was a pleasure for H.E. Ambassador Dr. Bashir Mohabbat to receive Mr. Afridun Amu, Afghanistan’s first professional surfer, at the embassy for a lunch and meeting in honor of his trip to Japan for the 2018 UR ISA World Surfing Games competition. 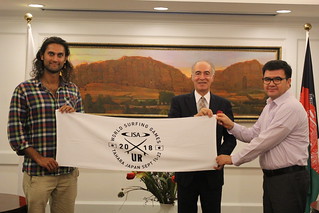 Mr. Amu was received at the embassy by Mr. Rahim Azimi, First Secretary, and Mr. Asif Agah, Second Secretary who gave him a tour of the embassy’s Rumi Balkhi Hall. Following this, the gentlemen enjoyed a friendly lunch of Afghan dishes made in honor of his visit where they were able to discuss Mr. Amu’s competitive endeavors in the sport of surfing as well as his experiences in Japan. 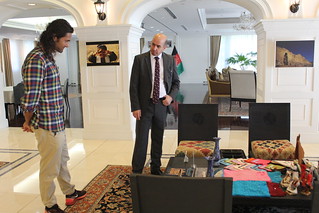 Mr. Afridun Amu is the first Afghan athlete to internationally represent Afghanistan in surfing. Even though Afghanistan is a landlocked country, surfing has become popular among Afghans. Mr. Amu is the president and one of the founders of the Wave Riders Association of Afghanistan (WRAA). Recently they have use the Panjshir River to promote surfing in Afghanistan. 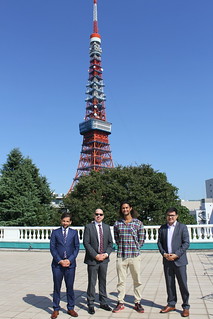 After lunch and a further tour of the embassy grounds, H.E. Dr. Mohabbat invited Mr. Amu into the Ambassador’s Office for a pleasant meeting and discussion. Mr. Amu thanked H.E. Dr. Mohabbat, the diplomats, and staff for their kind hospitality and gifted the Embassy a banner of the World Surfing Games. H.E. Dr. Mohabbat expressed his gratitude for the kind gift, his wishes for the continued success of Mr. Amu, and assured him that all Afghanistan was proud of his efforts and supporting him.