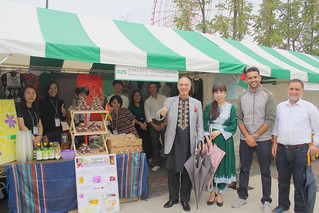 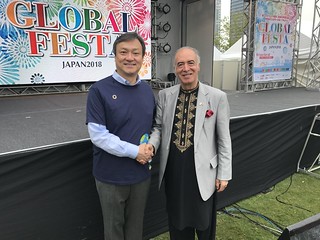 This festival is held annually to explain and display for Japanese and international citizens of all ages about the international cooperation activities carried out by Japan’s government and NGOs, in order to gain more public understanding and support of the necessity for the global development. At the event, the embassy’s Public Relations Office hosted a cultural booth in order to introduce Afghan culture and Afghan products for purchase to those who visited the booth. 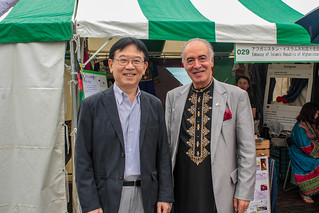 In the opening ceremony, H.E. Mr. Iwao Horii , Parliamentary Vice-Minister of Foreign Affairs, gave remarks regarding the importance of Japan being an active participant in the development process of many nationals across the globe in order to develop human capacity and forge peace. H.E. Mr. Hiroshi Taniyama, President of JANIC; and Hon. Mr. Kozo Honsei, in charge of Development Partnerships for JICA, also gave remarks in the opening ceremony. Following the opening ceremony, H.E. Dr. Mohabbat had had the honor of meeting with H.E. Mr. Iwao Horii. On behalf of the people and Government of the Islamic Republic of Afghanistan, H.E. Dr. Mohabbat thanked the people and Government of the friendly and noble nation of Japan for their steadfast and benevolent support of Afghanistan over the years as it has strives for development, peace, and prosperity. Further, he thanked H.E. Mr. Horii and the other hosts of the event for bringing such a successful event to the Japanese people and allowing the embassy to partake in the event. In return, H.E. Mr. Horii thanked H.E. Dr. Mohabbat for his kind words and noted that Japan would continue to stand by Afghanistan well into the future. 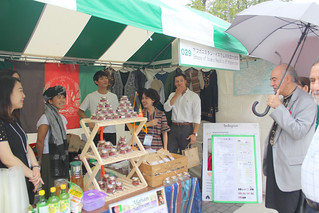 Despite the rainy day, the event was attended by more than 250 institutions, including Embassies and NGOs, who contributed to the promotion of international cooperation, for more than 50,000 visitors. There were over 1500 guests visiting the Afghanistan booth to learn about the many diverse culture aspects of Afghanistan, hear of the progress and development made over the recent years, and even purchase Afghan items such as lapis lazuli goods, afghan saffron, henna tattoos, and the afghan fusion saffron lemonade. All of the guests were excited to learn more about Afghanistan, sample Afghan saffron, and were very eager to take home items from Afghanistan. 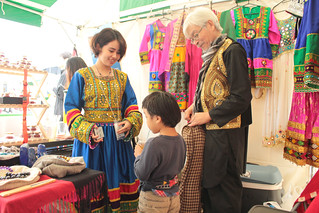 While at the event, H.E. Dr. Mohabbat also had the pleasure of meeting with H.E. Mr. Mitsuji Suzuka, Ambassador of Japan to Afghanistan, as he visited the Afghan booth, to whom expressed sincerest thanks and appreciation on behalf of the people and Government of Japan for their continuous support over the years on the path to peace and prosperity. He also had the pleasure of meeting with several of Their Excellencies the Ambassadors, diplomats with missions in japan, members of Japanese government, and other distinguished guests with whom he was able to discuss this most successful event. 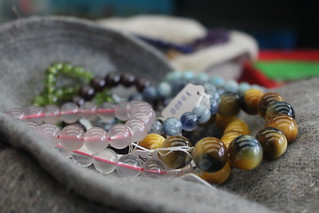