2018. 23. 09 Attendance at Commemorative Event for International Day of Sign Language.

Attendance at Commemorative Event for International Day of Sign Language. 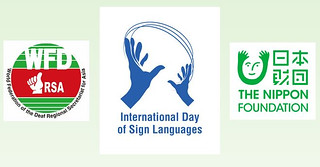 September 23, 2018: It was a pleasure for H.E. Ambassador Dr. Bashir Mohabbat to attend a commemorative reception in honor of International Sign Language Day at the YouTube Space Tokyo in Roppongi. Also in Attendance was Mr. Asif Agah, Second Secretary for the Embassy of the Islamic Republic of Afghanistan in Japan.
As of a decision made by the UN in 2017, International Day of Sign Languages (IDSL) is celebrated annually across the world on 23 September every year along with International Week of the Deaf. The choice of 23 September is the same date that the World Federation of the Deaf was established. It is a step further in the UN’s promise “to leave no one behind” and according the WFD website, is “a global movement of deaf unity and concerted advocacy to raise awareness of the issues deaf people face in their everyday lives. The WFD strongly believes that the present United Nations resolution is a valuable extension of this tradition and has the potential to increase the understanding of United Nations member states, the private sector and the United Nations’ system in closing existing gaps in the achievement of human rights for deaf people.”
While at the event, H.E. Ambassador Dr. Mohabbat had the pleasure of meeting with H.E. Mr. Manabu Horii, Parliamentary Vice-Minister for Foreign Affairs Japan, as well as several of Their Excellencies the Ambassadors, diplomats with missions in Japan, and other distinguished guests who all came together to celebrate this special day and bring awareness to the International Day of Sign Languages.