Courtesy Call by Mr. Kazutaka Sato of the Japan Press. 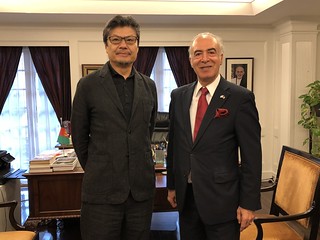 September 14, 2018: It was a pleasure for H.E. Ambassador Dr. Bashir Mohabbat receive a courtesy call by Mr. Kazutaka Sato, President of the independent news agency, the Japan Press, and an old friend of the Ambassador as well as a friend of Afghanistan, at the embassy in Tokyo.
After being welcomed and escorted into the office of the Ambassador, Mr. Sato thanked H.E. Ambassador Dr. Mohabbat for making time in his schedule to meet and for receiving him so warmly. In return, H.E. Dr. Mohabbat sincerely thanked Mr. Sato for his kind words and for coming to visit the Embassy on this courtesy call. Mr. Sato then recounted for H.E. Dr. Mohabbat of all his memories of Afghanistan and the many experience he had in his time reporting from there, beginning in 1982, while he covered the Afghan people's struggle for freedom. H.E. Dr. Mohabbat remarked on the great and many memories and experiences Mr. Sato had during his time in Afghanistan and encouraged him to one day visit again and see how much progress has been made since his last visit. Further, H.E. Dr. Mohabbat expressed his appreciation for the arrangement of this unique meeting and added his wishes for positive relations and collaborations between Afghanistan and the media well into the future. Moreover, he reiterated his sincerest and most heartfelt thanks on behalf of the people and Government of Afghanistan to the people and Government of Japan for their benevolent assistance, tireless support, and interest in establishing peace and prosperity for Afghanistan. In the very amicable environment, H.E. Dr. Mohabbat and Mr. Sato were able to discuss various topics that could potentially serve to help bridge the gap in understanding of Afghanistan’s culture to a Japanese audience.