2018. 26. 09 Attendance at Independence Day, Anniversary of Macedonia-Japan Relations, and Farewell Reception for H.E. Ambassador of Macedonia.

Attendance at Independence Day, Anniversary of Macedonia-Japan Relations, and Farewell Reception for H.E. Ambassador of Macedonia. 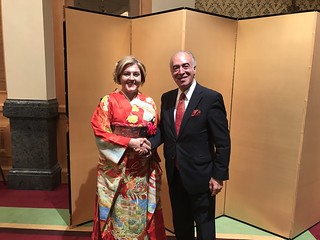 September 26, 2018: It was a pleasure for H.E. Ambassador Dr. Bashir Mohabbat to attend the celebration of Macedonian Independence Day, the 25th Anniversary of Diplomatic Relations between Macedonia and Japan, and the Farewell Reception of H.E. the Ambassador of Macedonia at the Hotel Okura in Tokyo.
H.E. Ambassador Dr. Mohabbat expressed his congratulations, on behalf of the people and the Government of the Islamic Republic of Afghanistan, to H.E. Dr. Andrijana Cvetkovikj, Ambassador of the Former Yugoslav Republic of Macedonia to Japan, in honor of this triad of most auspicious occasion – with wishes for further peace and prosperity for the people and Government of Macedonia. Further, he expressed his congratulations on a mission well done to H.E. Dr. Cvetkovikj and wished the best of luck in all future endeavors. In return, H.E. Dr. Cvetkovikj thanked H.E. Dr. Mohabbat for his kind word as well as for his attendance at the event. H.E. Dr. Mohabbat expressed his sincerest wishes for a deepening of relations between Afghanistan and Macedonia as well as their respective embassies. 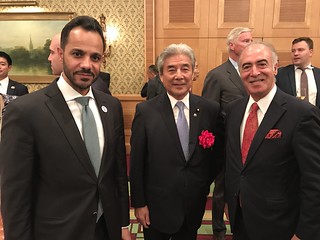 While at the event, H.E. Dr. Mohabbat also had the pleasure of meeting with H.E. Mr. Hirofumi Nakasone, former Foreign Minister and former Minister of Education of Japan, and H.E. Mr. Khaled Omran Sqait Sarhan Alameri, Ambassador of the United Arab Emirates to Japan, to whom he expressed wholehearted thanks and appreciation on behalf of the people and Government of the Islamic Republic of Afghanistan, for the steadfast and benevolent assistance by their respective nations over the years of Afghanistan’s developing peace and prosperity. In return, they thanked H.E. Dr. Mohabbat for his kind words and H.E. Mr. Nakasone additionally stated that Japan would continue to stand by and support Afghanistan in its development. Additionally H.E. Dr. Mohabbat met with several of Their Excellencies the Ambassadors, Diplomats with missions in Japan, and other dignified guests who were present for the auspicious occasion.