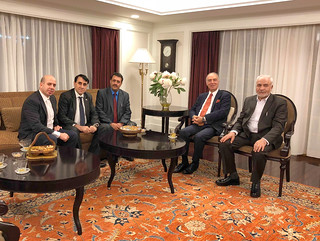 September 26, 2018:His Excellency Ambassador Dr. Bashir Mohabbat had the honor and privilege of hosting a dinner for Alhaj. Brig. General Abdullah Hazim Stanekzai, the Chief of Border Police for the Islamic Republic of Afghanistan’s Ministry of the Interior, at the Ambassador’s residence at the embassy. Also in attendance were Col. Abdul Rauf Karimi, Chief of Administration for the Afghanistan Border Police, as well as Mr. Basir Ahmad Hamdard, First Secretary, and Dr. Rahim Azimi, First Secretary, both of the Embassy of the Islamic Republic of Afghanistan in Japan. 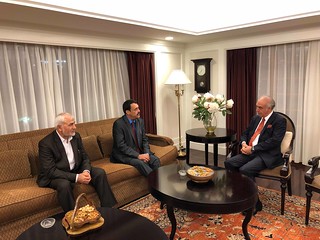 Alhaj. Brig. General Stanekzai was here in Japan for an official visit through the auspices of Ministry of Foreign Affairs of Japan. He first thanked H.E. Dr. Mohabbat for the invitation and expressed his sincere appreciation towards the Embassy of the Islamic Republic of Afghanistan Tokyo. Alhaj. Brig. General Stanekzai briefed H.E. Dr. Mohabbat about his excellent treatment on his trip here at the hosting of the Japanese government and Japan MOFA and was thankful to them for his very fruitful trip to Japan. In return, H.E. Dr. Mohabbat thanked him for his thoughtful words and expressed his great joy in hosting the occasion of Alhaj. Brig. General Stanekzai’s visit. They mutually agreed to strengthen closer relations between Afghanistan and Japan and further discussed topics of mutual interest and the dinner was held under a very amicable atmosphere.