2018. 20. 09 Visit to the Afghanistan Culture Association on the Occasion of Ashura.

Visit to the Afghanistan Culture Association on the Occasion of Ashura. 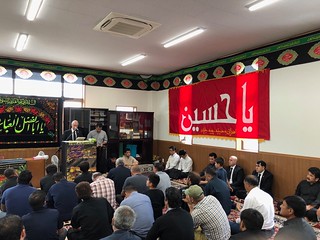 September 20, 2018: With much respect and on the occasion of Ashura, H.E. Ambassador Dr. Bashir Mohabbat made a visit to the Afghanistan Culture Association (Afghanistan Bunka Kyokai) in Chiba Prefecture’s town of Yotsukaido. Also in Attendance were Mr. Basir Ahmad Hamdard, First Secretary, and Dr. Rahim Azimi, First Secretary, for the Embassy of the Islamic Republic of Afghanistan in Japan.
While at the Afghanistan Culture Association’s site in Chiba, H.E. Ambassador Dr. Mohabbat gave his remarks to all those present wherein he extended his greetings to the association members and thanked them for asking him to speak on the occasion. Further, he expressed condolences to the audience as well as to all Muslims around the world, and for those who were martyred at Holy Karbala. He thanked the organizers for providing a event such as this for sharing the traditions and culture of Afghanistan and to express solemn respect on occasions such as this. Additionally he spoke on the significance of the occasion of Ashura, the Ashura movement in society, and mentioned that the tragedy of Ashura goes past just the historical incident but out through the Islamic world - that there are things to be learned still from Ashura such as the importance in acknowledging those striving for freedom & being sacrificed in the promotion of Islam; and the fight against cruelty and oppression must continue. H.E. Dr. Mohabbat concluded by encouraging all present to continue to serve as a bridges for goodwill between all Muslims, the Afghan community and the residents of Japan, and again thanked the organizers for their hospitality. 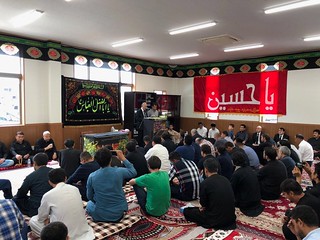