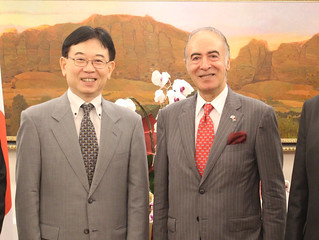 July 31, 2019: It was an honor and pleasure for H.E. Ambassador Dr. Bashir Mohabbat to have a lunch meeting with H.E. Mr. Mitsuji Suzuka, Ambassador of Japan to Afghanistan, in Tokyo.
H.E. Dr. Bashir Mohabbat expressed his gratitude to H.E. Ambassador Mr. Suzuka for making time in his schedule to meet once again and share lunch together allowing themselves the opportunity to discuss important matters. In return, H.E. Mr. Suzuka expressed appreciation for the opportunity to meet again and discuss topics of importance to both of their respective missions. On behalf of the people and Government of the Islamic Republic of Afghanistan, H.E. Dr. Mohabbat thanked H.E. Mr. Suzuka for the very longtime friendly relationship between Japan and Afghanistan and expressed sincere gratitude for the steadfast and benevolent support and assistance of the noble nation of Japan which has stood by Afghanistan throughout the rebuilding progression as it strives for further peace and prosperity in an Afghan-owned and Afghan-led process.
In return, H.E. Mr. Suzuka thanked H.E. Dr. Mohabbat for his kind words, and assured him of Japan’s continued support of Afghanistan in its development. H.E. Dr. Mohabbat apprised H.E. Mr. Suzuka of the most recent developments regarding recent developments related to the peace process and the upcoming presidential election. H.E. Mr. Suzuka expressed his thanks for the full briefing and was very impressed and interested in the most current steps and developments in the Afghan-owned and Afghan-led process towards peace. Moreover, he remarked on the great initiative and leadership by H.E. President Mohammad Ashraf Ghani through these endeavors in assuring the continuation of the democratic election, and also promised that people and Government of Japan would fully continue to support and stand by the Afghan people in the peace process well into the future. They further discussed all topics of mutual interest between them.