2019.22.07 Attendance at the Foundation for Social Contribution Award Event.

Attendance at the Foundation for Social Contribution Award Event. 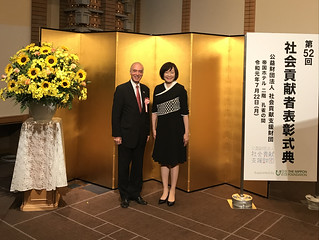 July 22, 2019: It was a pleasure for H.E. Ambassador Dr. Bashir Mohabbat to attend the “52nd Award for Social Contributors’ hosted by the Foundation for Social Change at the Imperial Hotel in Tokyo. 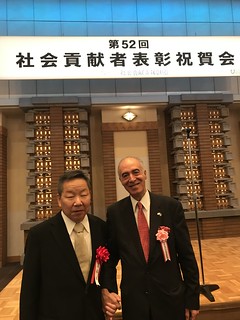 At the opening ceremony, welcoming remarks were given by the Hon. Mrs. Akie Abe, Chairwoman of the Foundation for Social Change and the First lady of Japan. On of the Award recipient this year was Nara Prefecture’s Mr. Noboru Takitani, who was a part of Overseas Technical Corporation Agency (OTCA) – the predecessor of JICA, in 1974 as part of the Colombo Plan when they worked in Afghanistan to manufacture prosthetic limbs; until returning to Japan 1980. At the invitation of Ms. Keiko Nishigaki, he returned to Afghanistan and began working with the volunteer organization providing prosthetic limbs to children in orphanages. 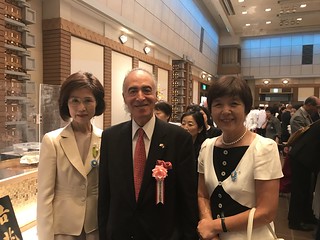 At the reception, on behalf of the people and government of the Islamic Republic of Afghanistan, H.E. Ambassador Dr. Mohabbat expressed thanks and appreciation to Mr. Takitani for his ceaseless work in helping to make better the lives of Afghans for which Afghanistan would forever be grateful. In Return Mr. Takitani thanked H.E. Dr. Mohabbat for his kind words and expressed his intentions and wishes to be able to continue his work and continue providing prosthetics to children.
H.E. Dr. Mohabbat also had the opportunity to express sincere thanks and appreciation to Hon. Chairwoman and First Lady Mrs. Akie Abe, on behalf of the people and Government of the Islamic Republic of Afghanistan, for the steadfast and benevolent support of the noble people and Government of Japan for the many years Afghanistan has striven form progress, prosperity, and peace in an Afghan-owned and Afghan-led process. Moreover, he thanked her for Chairing such a wonderful organization which hosts unique opportunities to honor members of the community which engage in noble acts such as this.
While at the event, H.E. Dr. Mohabbat also had the pleasure of again meeting and speaking with Hon. Ms. Mariko Nakasone, former Chairman of the International Ladies Benevolent Society to whom he extended warm greetings and appreciation for her support of volunteer projects which have helped to benefit Afghanistan. Additionally, he had the pleasure of meeting with other distinguished guests all present in honor of the awards event.

Attendance at the Foundation for Social Contribution Award Event.
Posted by AEJ at 16:28