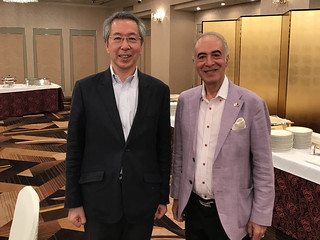 July 24, 2019: It was a pleasure for H.E. Dr. Bashir Mohabbat to attend the Cormorant-Fishing Party on the River Nagara, hosted by the Imperial Household Agency, in Gifu Prefecture. 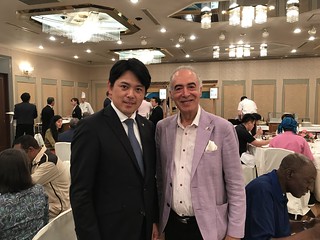 The event began in the Banquet Room of the Gifu Grand Hotel, where a screening of a short film about cormorant fishing was held. Following the wonderful show, the guests boarded barges on the River Nagara and commenced cormorant fishing, at the conclusion of which the distinguished guests returned to the Ballroom for a tremendous buffet dinner. This annual ceremony is held every year at the invitation of the Imperial Household Agency.
On behalf of the people and Government of the Islamic Republic of Afghanistan in Tokyo, H.E. Dr. Mohabbat expressed sincere thanks to the people and Government of Japan through H.E. Mr. Yoshitaka Akimoto, the Grand Master of Ceremonies for the Imperial Household Agency for the steadfast and benevolent support over the years as Afghanistan has striven for progress, prosperity, and peace. Additionally he mentioned that as this year is a milestone year for Afghanistan and as such has great significance for Afghanistan and Japan. In return, H.E. Master of Ceremonies Mr. Akimoto thanked H.E. Dr. Mohabbat for his attendance as well as for his kind words and assured him that Japan values its friendly and warm relations with Afghanistan and would endeavor to uphold them well into the future.. H.E. Dr. Mohabbat further expressed his wishes for continuous friendship between Afghanistan and Japan, reaffirming the importance of deeply rooted cultural events such as this which do much to enhance the diplomatic missions of the various nations represented. Also while at the event, H.E. Dr. Mohabbat had the pleasure of meting again with Hon. Mr. Masanao Shibahashi, Mayor of Gifu City, to whom he expressed heartfelt thanks and appreciation for opening up the many wonders of Gifu City to all of the visiting guests in attendance for the Cormorant-fishing party. Additionally H.E. Dr. Mohabbat had the pleasure of meeting and speaking with the other distinguished guests in attendance for the event about many topics of mutual interest.