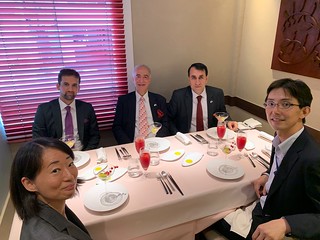 July 11, 2019: It was a pleasure for H.E. Ambassador Dr. Bashir Mohabbat to attend a luncheon meeting with Mr. Hajime Ueda, Director of Terrorism Prevention Division for the Consular Affairs Bureau of MOFA Japan. Also in attendance was Ms. Yoshiko Shimokawa, Assistant Director of the same division, as well as Mr. Basir Ahmad Hamdard, First Secretary, and Mr. Abdul Hameed Hashimi, Third Secretary and Consul for the Embassy of the Islamic Republic of Afghanistan in Japan.
Director Mr. Ueda expressed his sincere appreciation to H.E. Ambassador Dr. Mohabbat for meeting with him again to continue the good relations between their division and the Embassy. H.E. Dr. Mohabbat thanked Director Ueda for hosting the lunch as well as for his kind words. H.E. Dr. Mohabbat also expressed his gratitude, on behalf of people of Afghanistan, for Japan’s steadfast and continuous support of Afghanistan in its rebuilding process over the years during its road to progress, prosperity, and peace in an Afghan-owned and Afghan-led process. He further expressed his wishes to make deeper and more profound the relationship and bond between Afghanistan and Japan.
Additionally H.E. Dr. Mohabbat updated Director Ueda on the many progressive achievements in Afghanistan’s peace process, and asked for Japan’s continued support in helping to provide more advancement in Japan's investment in the economics and opportunities of Afghanistan in order to help cement a foundation for security. All present further discussed topics of mutual interest such as the recent speeches by leaders of allied nations planning for active steps to achieving further regional peace, security, and stability.

Luncheon Meeting with Director of Terrorism Prevention & Response Division of MOFA Japan.
Posted by AEJ at 16:02