2019.01.07 Luncheon Meeting for Executives of the International Friendship Exchange Council Hosted at the Embassy of the Islamic Republic of Afghanistan 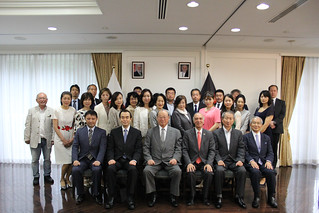 July 1, 2019: It was a pleasure for His Excellency Ambassador Dr. Bashir Mohabbat to host a luncheon meeting for representatives of the International Friendship Exchange Council (FEC) at the Maulana Jalaluddin Rumi Balkhi Hall within the embassy building.
In his welcoming address, H. E. Ambassador Dr. Mohabbat thanked the esteemed body of participants for pursuing their respective interests in the proud Islamic Republic of Afghanistan by joining the Diplomats and staff for the informative exchange. All of the Embassy’s personnel were in attendance to receive the honored guests for the luncheon and meeting. Among the guests was the Representative of the Organizer, Mr. Hiroshi Saito, who gave the opening remarks following the welcoming address. 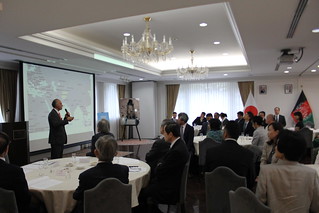 Mr. Saito, the FEC’s Chairman of the Japan-Middle East Cultural and Economic Exchange Committee and Honorary Advisor to the Mizuho Financial Group Inc., took the podium after H. E. Ambassador Dr. Mohabbat and began by complimenting the Embassy. Mr. Saito thanked Ambassador Dr. Mohabbat for the hospitality, and expressed joy in the opportunity to progress the mission of the FEC through bringing Diplomatic missions and private executives together in an environment of friendliness. 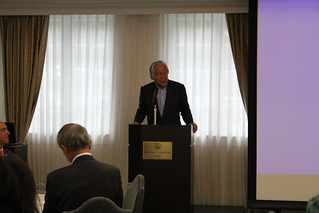 Following Mr. Saito’s remarks, H.E. Dr. Mohabbat resumed the podium, thanked Mr. Saito for his kind words, and began his presentation: “History, Culture and Current Situation of Afghanistan.” For the next half hour, it was the pleasure of H.E. Dr. Mohabbat to educate the gracious audience about his beloved Afghanistan. The presentation offered insight into the history, culture, natural resources, and progress of Afghanistan, while also covering similarities between Afghanistan and Japan, and Afghanistan’s bright economic prospects internally, regionally, and globally. 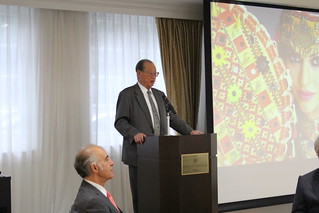 At the end of the presentation, H.E. Dr. Mohabbat fielded question from the participants and FEC representatives, and then graciously thanked the FEC, especially the members representing the organization at the meeting, for their aim in steering the diplomatic and private sectors towards a friendly, peaceful, and prosperous tomorrow. After, thanking the FEC and the representatives, H.E. Dr. Mohabbat invited the guests to partake in a meal of Afghan foods prepared specially for the occasion.
After having dined together, Mr. Ken Matsuzawa, President of the FEC, thanked H.E. Dr. Mohabbat, all the Embassy Diplomats and staff for the amazing Afghan hospitality and for teaching them just how wonderful Afghanistan and the Afghan people truly are. All those present had an enjoyable time and remarked at how impressed they were with their new introduction to the wonders of Afghanistan.
Luncheon Meeting for Executives of the International Friendship Exchange Council Hosted at the Embassy of the Islamic Republic of Afghanistan
Posted by AEJ at 12:00