2019.02.07 Attendance at Inauguration Reception of H.E New Ambassador of China.

Attendance at Inauguration Reception of H.E New Ambassador of China. 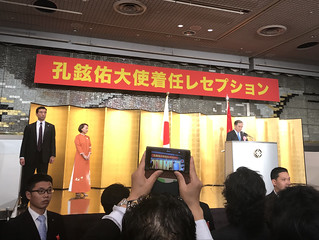 July 2, 2019: It was a pleasure for His Excellency Ambassador Dr. Bashir Mohabbat to attend the inauguration reception of H.E Mr. Kong Xuanyou, the new Ambassador of China to Japan, at the Hotel New Otani in Tokyo.
On behalf of the people and Government of the Islamic Republic of Afghanistan, H.E. Dr. Mohabbat first expressed his congratulations to H.E. Ambassador Mr. Kong on the occasion of the beginning of his time as Ambassador and wished him the best of successes over the duration of his tenure. Further he thanked him for the invitation to the reception and expressed his wishes for a continuance of good bilateral relations between their embassies and respective countries. In return, H.E. Mr. Kong thanked H.E. Dr. Mohabbat for his warm, kind word as well as expressed his agreeing wish for warm and strong relations between themselves and their respective countries.
While at the reception, H.E. Dr. Mohabbat also had the pleasure of meeting and discussing topics of mutual interest with several others of Their Excellencies the Ambassadors, diplomats with missions in Japan, members of government, and other distinguished guests in attendance at the reception.

Attendance at Inauguration Reception of H.E New Ambassador of China.
Posted by AEJ at 15:57