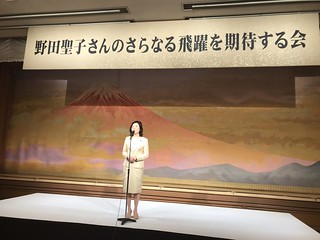 December 17, 2019: It was a pleasure for H.E. Dr. Bashir Mohabbat to attend a reception for the Hon. Ms. Seiko Noda, Member of the House of Representatives and the former Minister of Internal Affairs and Communications, Minister in charge of Women's Empowerment, and Minister of State for the Social Security and Tax Number System, at the Imperial Hotel in Tokyo.
Hon. Ms. Seiko Noda is not only a long time personal friend of H.E. Ambassador Dr. Mohabbat but also a long time friend of the Embassy and Afghanistan. H.E. Dr. Mohabbat thanked Hon. Ms. Noda for the invitation as well as expressed, on behalf of people and the Government of the Islamic Republic of Afghanistan, deep appreciation to the Japanese government through Hon. Ms. Noda for its continuing support of Afghanistan’s reconstruction process which is paving the way for increased greater livelihood, peace and prosperity for the Afghan people. Additionally, he expressed his humble happiness at having such a true friend of Afghanistan.
In return, H.E. Ms. Seiko Noda expressed her sincere gratitude for the kind words as well as for H.E. Ambassador Mohabbat’s attendance at the event. Further she stated that she would continue to do all in her capacity to make sure Japan continued to stand by Afghanistan, as it is a place very near to her heart, well into the future. While at the event, H.E. Dr. Mohabbat also had the pleasure of meeting with others of Their Excellencies the Ambassadors, diplomats with missions in Japan, members of Government, prominent business members, and other distinguished guests all present in honor to celebrate the Hon. Ms. Noda.