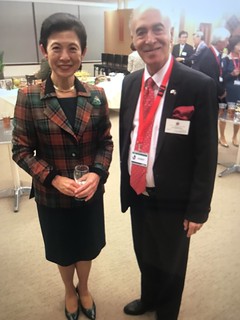 December 17, 2019: It was an honor and a pleasure for H.E. Ambassador Dr. Bashir Mohabbat to attend the Asiatic Society of Japan, Inc. monthly lecture at the J League House in Tokyo. Also in attendance was the Honorary Patron of the organization, Her Imperial Highness Princess Takamado. 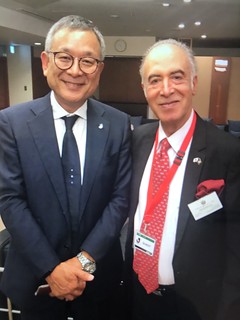 On behalf of the people and Government of the Islamic Republic of Afghanistan, H.E. Ambassador Dr. Mohabbat greeted Her Imperial Highness Princess Takamado, and through her thanking the people and Government of Japan for their steadfast and benevolent support of Afghanistan over the years on its quest for progress, prosperity, and peace. In return, Her Imperial Highness Princess Takamado thanked H.E. Dr. Mohabbat for his kind words as well for his participation in the monthly meeting of the ASJ in which he is also a Board Member.
Following the lecture, H.E. Dr. Mohabbat had the pleasure of meeting and speaking with Hon Mr. Mitsuru Murai, Chairman of the J. League to whom he expressed great thanks for his organization in hosting the event’s monthly meeting. Additionally, he also met with the members and special guests all present in honor of the ASJ monthly meeting.