Meeting with H.E. Ambassador of the United Arab Emirates. 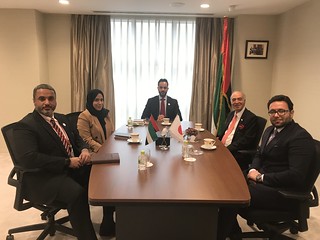 December 19, 2019: It was an honor for H.E. Ambassador Dr. Bashir Mohabbat to meet with H.E. Mr. Khaled Omran Sqait Sarhan Alameri, Ambassador for the Embassy of the United Arab Emirates in Japan, at the Emirati Embassy in Tokyo. Also in attendance was Mr. Najibullah Safi, Counselor and DCM for the Embassy of the Islamic Republic of Afghanistan in Tokyo.
H.E. Ambassador Mr. Khaled Alameri extended a sincere and warm welcome to H.E. Ambassador Dr. Mohabbat and thanked him for arranging to meet. On behalf of the people and Government of the Islamic Republic of Afghanistan, H.E. Dr. Mohabbat extended thanks to H.E. Mr. Alameri for the warm relations and cooperation between Afghanistan and the UAE over the years which has helped contribute to Afghanistan’s mission of progress, prosperity, and peace for the region. He also thanked the people and Government of the United Arab Emirates for their support of the people and Government of Afghanistan over the years. Furthermore, H.E. Dr. Mohabbat expressed his deep hope and desire for the cooperation between the two entities to strengthen further especially in the realms collaborative economic enhancements. H.E. Mr. Alameri concurred with H.E. Dr. Mohabbat and reciprocally conveyed his hope and desires to see further cooperation between their respective countries and embassies to promote economic growth. All present further discussed ways to advance investment in the economics and import/export of Afghanistan with further economic cooperation among Afghanistan-UAE-Japan. Following the exchange, H.E. Dr. Mohabbat and Hon. Mr. Alameri further discussed topics of mutual interest.