2019.18.11 Receiving Courtesy Call by H.E. Ambassador of Bosnia and Herzegovina.

Receiving Courtesy Call by H.E. Ambassador of Bosnia and Herzegovina. 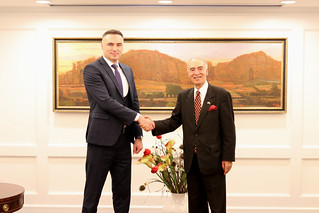 November 18, 2019: His Excellency Ambassador Dr. Bashir Mohabbat had the pleasure of receiving a courtesy call by H.E. Ambassador Mr. Sinisa Berjan of Bosnia and Herzegovina at the Embassy in Tokyo. Also in attendance was Mr. Najibullah Safi, Counselor and Deputy Chief of Mission. 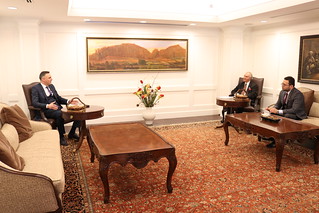 H.E. Ambassador Dr. Mohabbat and Mr. Safi warmly welcomed H.E. Ambassador Mr. Berjan and thanked him for arranging to meet with them. In return, H.E. Mr. Berjan H.E. Dr. Mohabbat and Mr. Safi for making time for the meeting as well as for his kind words.
On behalf of the people and Government of the Islamic Republic of Afghanistan, H.E. Dr. Mohabbat extended extreme gratitude for the support and assistance of the people and Government of the Bosnia and Herzegovina since 2001, including their contribution of troops to the ISF to help forward the peace mission in Afghanistan. Bosnia and Herzegovina has stood with Afghanistan as its led itself towards peace and helped to bring it to its current progress and achievements including assistance in helping it to secure its recent democratic elections as well as progress the Afghan-owned and Afghan-led peace process. In return, H.E. Mr. Berjan thanked H.E. Dr. Mohabbat for his kind words, as well as expressed his hopes for continued good relations between themselves and their respective embassies in Tokyo, in the hope to further establishing stronger bilateral relations by opening an Embassy in Kabul in the future.