2019.08.11 Attendance at the Reception for the Promotion of Miyazaki Prefecture.

Attendance at the Reception for the Promotion of Miyazaki Prefecture. 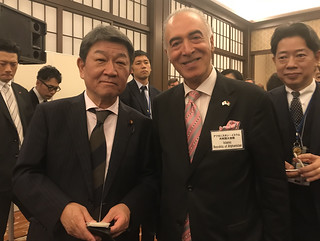 November 8, 2019: It was a pleasure for H.E. Ambassador Dr. Bashir Mohabbat attend the Miyazaki Prefecture Promotion Reception, co-hosted by the Ministry of Foreign Affairs and the Miyazaki Governor’s office at the Iikura Guest House in Tokyo. Also in attendance was Mr. Najibullah Safi, Counselor and Deputy Chief of Mission for the Embassy of the Islamic Republic of Afghanistan in Tokyo. 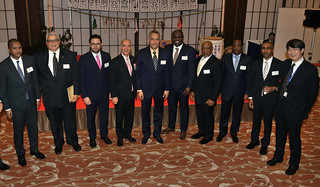 The event was held to introduce the guests to the many wonderfully unique aspects of local goods, products and features of Miyazaki Prefecture. There were several booths set up in the hall to display the features of the prefecture to the guests as well as foster networking. Opening remarks for the event were given by H.E. Mr. Toshimitsu Motegi, Minster of Foreign Affairs of Japan. While at the event, H.E. Ambassador Dr. Mohabbat had the pleasure of meeting and speaking with H.E. Foreign Minister Motegi and Hon. Mr. Hideo Higashikokubaru, Governor of Miyazaki Prefecture whom he thanked for the invitation to the wonderfully informative event as well as thanked them, on behalf of the people and Government of the Islamic Republic of Afghanistan, for the tireless dedication and benevolence the people and Government of Japan has shown to Afghanistan over the years in its reconstruction process and developing peace. In return, H.E. Foreign Minister Motegi and Hon. Mr. Higashikokubaru thanked H.E. Dr. Mohabbat for his attendance and expressed their wishes for continued and warm and friendly relations between Afghanistan and Japan.
Also in attendance were others of Their Excellencies the Ambassadors, diplomats with missions in Japan, leading business people, and other dignified guests, several of whom H.E. Dr. Mohabbat and Mr. Safi met with and discussed many topics of mutual interest. Key to the mission of the Regional Promotion Seminar is to foster a depth of understanding about the various regions of Japan among foreign diplomats. As such, the interactions at this tremendous event did much to enhance and grow the bond between Japanese local governments, communities, and the diplomatic corps.