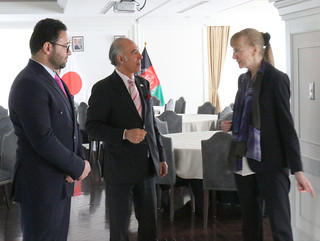 November 8, 2019: His Excellency Ambassador Dr. Bashir Mohabbat had the pleasure of receiving a courtesy call by Ambassador-designate Ms. Ina Lepel of Germany at the Embassy in Tokyo. Also in attendance was Mr. Najibullah Safi, Counselor and Deputy Chief of Mission. 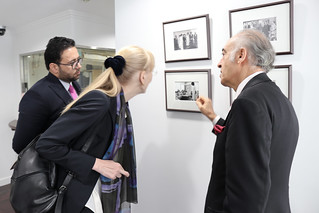 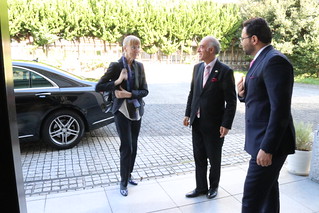 On behalf of the people and Government of the Islamic Republic of Afghanistan, H.E. Dr. Mohabbat extended extreme gratitude for the support and assistance of the people and Government of the Germany since 2001, including the recent announcement of their dedicating more than 70 million euro for development and capacity building in Afghanistan. Germany has stood steadfast with Afghanistan over the years helping to bring it to its current progress and achievements including assistance in helping it to secure its recent democratic elections as well as progress the Afghan-owned and Afghan-led peace process.
In return, Ambassador-designate Ms. Lepel thanked H.E. Dr. Mohabbat for his kind words, as well as spoke to the long historic and friendly relation Germany has enjoyed with Afghanistan; mentioning the presence of hundreds of thousands of Afghans currently living now in Germany contributing well to society. Further, Ms. Lepel sincerely thanked H.E. Dr. Mohabbat and Mr. Safi for such a kind welcome to Japan and expressed her hopes for continued good relations between themselves and their respective embassies.