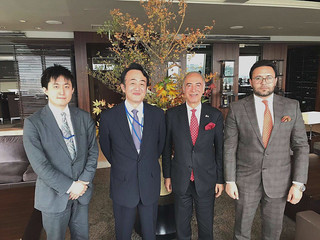 November 7, 2019: It was a pleasure for H.E. Ambassador Dr. Bashir Mohabbat to host a luncheon meeting with his longtime friend, and longtime friend of Afghanistan, H.E. Mr. Katsuhiko Takahashi, Director-General and Assistant Minister for the Middle Eastern and African Affairs Bureau, as well as Special Representative for Afghanistan and Pakistan; and Mr. Koichi Hatanaka from the Second Middle East Division of MOFA Japan. Also in attendance was Mr. Najibullah Safi, Counselor for the Embassy of the Islamic Republic of Afghanistan in Tokyo.
On behalf of the people and Government of the Islamic Republic of Afghanistan, H.E. Ambassador Dr. Mohabbat expressed wholehearted gratitude to the Ministry of Foreign Affairs for the noble nation of Japan, under the guidance and attention by H.E. Mr. Takahashi and Mr. Hatanaka, for their support and coordination of the Official Visit by H.E. President Dr. Mohammad Ashraf Ghani to Japan last month in honor of the Enthronement Ceremony of His Imperial Highness the Emperor of Japan. Moreover, they were thanked for coordinating the special bilateral meeting between H.E. President Dr. Mohammad Ashraf Ghani and H.E. Prime Minister Mr. Abe which was very productive and promising. Further, H.E. Dr. Mohabbat followed up with some of the discussion from the bilateral meetings and again asked for the support of Japan promoting the investment by Japan’s private sector into Afghanistan’s mining sector.
In return, H.E. Mr. Takahashi and Mr. Hatanaka thanked H.E. Dr. Mohabbat and Mr. Safi for meeting with them as well as for the kind words. H.E. Mr. Takahashi reassured him that Japan values its strong and friendly bilateral tie with Afghanistan and as such would endeavor to do even more further those relations in the upcoming year, and well into the future. All those present further discussed topics of mutual interest regarding peace economics, and investment.