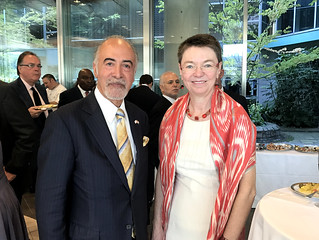 October 25, 2018: It was an honor for H.E. Ambassador Dr. Bashir Mohabbat to attend a reception honoring the European Union Delegation at the Europe House in Tokyo.
On behalf of the people and Government of the Islamic Republic of Afghanistan, H.E. Ambassador Dr. Mohabbat expressed his sincerest gratitude to Ambassador-Designate of the European Union to Japan, Dr. Patricia Flor, on the notable occasion and thanked her for the E.U.’s steadfast and generous support and assistance to Afghanistan over the years which has helped to pave the progressive road to peace and prosperity. Thanks to their support, Afghans are living happier, healthier and more quality filled lives. In return, Ambassador-Designate Dr. thanked H.E. Dr. Mohabbat for his kind words and assured him that they would continue to stand by Afghanistan as it continued the charge in an Afghan-owned and Afghan-led charge towards peace and prosperity.
Also while at the event, H.E. Dr. Mohabbat had the pleasure of meeting and speaking with several others of Their Excellencies the Ambassadors, Heads of Missions, government leaders, and distinguished guests all of whom were present to partake and celebrate in the reception to honor the E.U. Delegation.