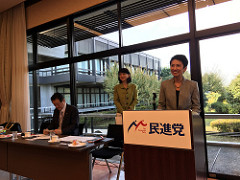 November 18, 2016: His Excellency Ambassador Dr. Sayed Mohammad Amin Fatimie, Ambassador of the Embassy of the Islamic Republic of Afghanistan, was warmly welcomed by the Democratic Party to attend “Café Democrats”. The event, which was held at the Parliamentary Museum in Tokyo’s Chiyoda Ward, aimed at discussing the various challenges that the DP are expected to face during the term of newly-appointed H.E. Mrs. Renho, President of the Democratic Party. 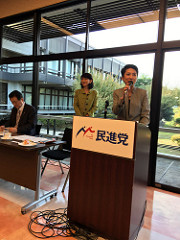 The event was an excellent opportunity for H.E. Ambassador Dr. Fatimie to stay updated on developments within the esteemed party but also to get acquainted with new challenges that may face them as the leadership shifts from the interim guidance of Hon. Mr. Katsuya Okada to newly-appointed H.E. Mrs. Renho. It was an equally important occasion for H.E. Dr. Fatimie to connect with some of the most influential people in Japan, and was especially honored to have met with Mrs, Hiroe Makiyama, Vice Leader of the Kanagawa Prefectural Headquarters of the Democratic Party, Mrs. Yoko Miyazaki, Member of the International Department of the Democratic Party, Mr. Hideya Sugio, Member of the House of Councillors. Among the guests were also the ambassadors and diplomats from several diplomatic missions in Tokyo.