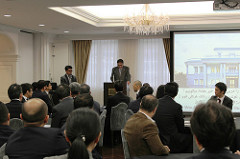 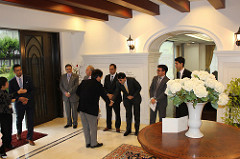 Once all guests were received, the opening address was given by Mr. Asif Agah who welcomed all in attendance. In his opening remark, H.E. Ambassador Dr. Fatimie extended his welcome and thanked everyone for being present to celebrate the visit to Japan by Hon. Mr. Habibzai and Hon. Mr. Wahidi. H.E. Dr. Fatimie discussed the significance of the occasion and the important role the people and Government of Japan, MOFA Japan, JICA, Japanese academic institutions, NGOs, construction companies, and corporations for their ceaseless efforts in proactively spreading peace and prosperity around the world and particularly in Afghanistan. 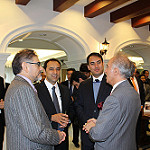 H.E. Mr. Katsuhiko Takahashi, Deputy Director General of Middle East and African Affairs Bureau for MOFA Japan, gave his remarks welcoming the two honored guests to Japan and expressed his desire for a further strengthening of the already strong bond and relations of Japan and Afghanistan. The Hon. Mr. Habibzai next gave his remarks, thanking the hosts and all in attendance for such a warm welcome. He expressed his hopes for his experience here and in returning to Kabul with new perspective. The Hon. Mr. Wahidi followed with his remarks and similarly thanked the hosts and guests in attendance for the event and chance to learn even more. 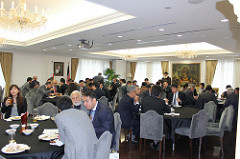 After all had spoken, Mr. Agah invited the guests to partake in the Afghan dishes prepared by the Embassy which were served for all to enjoy. Following the luncheon, all guests present partook in a group photo, to commemorate the auspicious occasion. 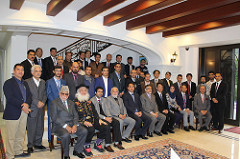