1/11/16 H.E. Dr. Fatimie attends the reception celebrating the Anniversary of the Ministry of Defense and the Japan Self Defense Forces 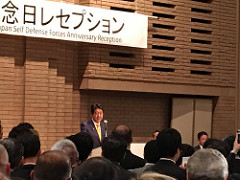 November 1, 2016: His Excellency Ambassador Dr. Sayed Mohammad Amin Fatimie had the pleasure of attending the reception celebrating the Anniversary of the Ministry of Defense and the Japan Self Defense Forces at Ruri Hall of the Grand Hill Ichigaya Hotel. 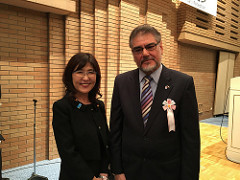 This reception event is held to celebrate the Anniversary of the Establishment of the Self-Defense Forces here in Japan which were established on July 1, 1954. The Minister of Defense for Japan, H.E. Ms. Tomomi Inada, gave remarks during the ceremony. One of the keynote speakers on this night was the Prime Minister of Japan, H.E. Mr. Shinzo Abe. He gave a very motivational speech, talked about the history of the Self Defense Forces, and expressed his hopes for these organizations in Japan. 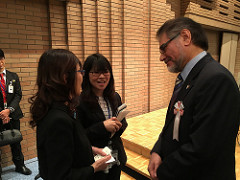