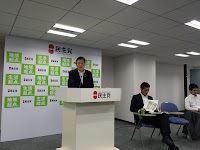 Symbolic of the results of continued tireless efforts and significant achievements that have been made in furthering Afghanistan's profile in Japan during the previous four and a half years, which was highlighted when, upon arriving at the hall for the Cafe Democrats meeting, in a rare moment, the Director General of the DPJ's International Department and Member of the House of Councillors The Honorable Mr. Yukihisa Fujita, came forward and personally greeted His Excellency Ambassador Dr. Fatimie. The Hon. Mr. Fujita communicated his condemnation to H.E. Ambassador Dr. Fatimie of the recent terrorist attack on Afghanistan's National Assembly and expressed his sincerest condolences to the people of Afghanistan for the deaths and injuries caused and stated that Japan and the DPJ will continue to support Afghanistan. H.E. Ambassador Dr. Fatimie expressed, on behalf of the people and Government of the Islamic Republic of Afghanistan, his utmost gratitude to The Hon. Mr. Fujita for his comments and support and articulated that terrorism does not respect political or religious boundaries and has no respect for human life. 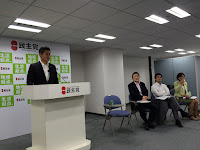 At the Cafe Democrats event which informs the diplomatic community of the DPJ's domestic and foreign policy agendas, H.E. Ambassador Dr. Fatimie also met with the DPJ's Vice Director of the International Department and member of the House of Councillors The Honorable Mr. Hiroe Makiyama, and with Chair of the party's Policy Research Committee and Member of the House of Representatives The Honorable Mr. Goshi Hosono and extended his appreciation, on behalf of the people and Government of the Islamic Republic of Afghanistan, for Japan and the DPJ's ongoing assistance to Afghanistan's sustainable development.
Posted by AEJ at 01:00