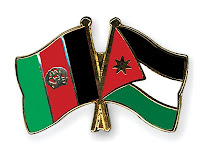 June 15, 2015:
Jordan has played an important role in the furthering of Afghanistan's peace and development and it was with this in mind that His Excellency Ambassador Dr. Fatimie attended a reception to celebrate the 16th Anniversary of His Majesty King Hussein's Accession to the Throne and the Independence Day of Jordan. Hosted at Hotel Okura, H.E. Ambassador Dr. Fatimie conversed with His Excellency Ambassador Mr. Demiye Zuher Haddad and Jordanian diplomats and, on behalf of the people and Government of the Islamic Republic of Afghanistan, extended his most forthright best wishes for Jordan's peace and prosperity. In return, H.E. Ambassador Mr. Haddad expressed his sincere hope for Afghanistan's success in its continuing path toward peace and sustainable development. 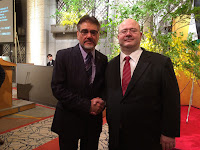 H.E. Ambassador Dr. Fatimie used the occasion to further extend Afghan-Japan relations through meeting with some of Japan's most powerful political figures such as with His Excellency former Prime Minister Yasuo Fukuda, State Minister of Defence and State Minister of the Cabinet Office His Excellency Mr. Akira Sato, with President of the governing LDP's partner party Komieto, and long time friend of Afghanistan, His Excellency Mr. Natsuo Yamaguchi, with prominent LDP member The Hon. Mr. Ryohei Nishikawa, and with many other distinguished guests. 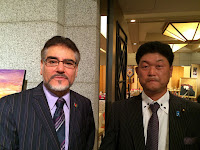