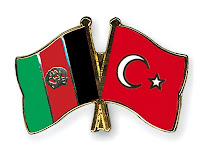 June 6, 2015:
The reception of the Turkish Frigate TCG Gediz’s visit to Tokyo offers a vital opportunity for Afghanistan to associate itself with other countries on the international stage in regards for common concerns and development. As a wonderful chance to promote harmonious relationship between Turkey and Afghanistan, His Excellency Ambassador Dr. Fatimie had the great pleasure of meeting with the esteemed Ambassador of Turkey, H.E. Mr. Ahmet Bulent Meric and the Flag Officer of TCG Gediz Admiral Radm Namik Alper, who is also the representative of the Turkish Naval Force. H.E. Ambassador Dr. Fatimie expressed his utmost appreciation to Admiral Alper for the Turkish service personnel who have sacrificed their lives protecting freedom and democracy, a sacrifice that will never be forgotten by the people of Afghanistan.

In maintaining Afghanistan’s continuously warm relations with The Imperial Family of Japan, H.E. Ambassador Dr. Fatimie expressed his sincere respect of Afghanistan to Her Imperial Highness Princess Takamado and the Imperial Family, in high praise for Japan’s positive role in contributing to Afghanistan’s development. With his genuine appreciation for Japan’s further political and economic support to Afghanistan, His Excellency Ambassador Dr. Fatimie warmly greeted the President of the governing LDP's partner party Komieto, and longtime friend of Afghanistan, His Excellency Mr. Natsuo Yamaguchi and Mrs. Yamaguchi, demonstrating a well-deserved recognition of H.E. President Yamaguchi’s personal role in Afghanistan’s way to achieving democratic governance and economic development. 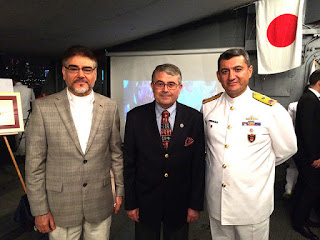 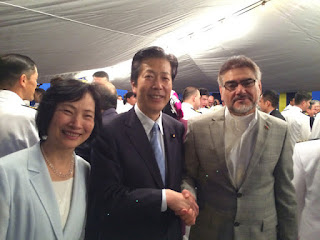 H.E. Ambassador Dr. Fatimie also met Special Advisor to the Board of Chamberlains of the Imperial Household, The Honorable Mr. Nobutake Odano and Mrs. Odano to express his appreciation for their attentive concern for Afghanistan’s future advancement. 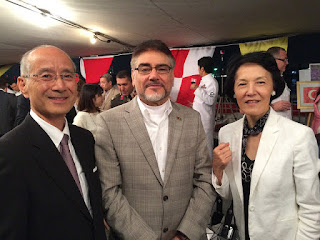 On this successful event, on behalf of the people and Government of the Islamic Republic of Afghanistan, H.E. Ambassador Dr. Fatimie voiced gratitude for the Government and Navy of Turkey regarding the country’s generous help in Afghanistan’s security and social-economic progress. H.E. Ambassador Dr. Fatimie also delightfully met with other influential military and government officials from various countries on this special occasion, including the Director of First Middle East Division in Middle Eastern and African Affairs Bureau, The Honorable Mr. Ken Mukai; the Director of European Union Economic Affairs Division in Economic Affair Bureau, The Honorable Mr. Shinji Matsui; MoFA Japan's Chief of Protocol His Excellency Ambassador Mr. Jun Yamazaki; the Defense, Military, Naval and Air Attaché at the Embassy of the Republic of Poland, The Honorable Mr. Mirostaw Draus; the Department Head of International Cooperation in the Ministry of National Defense of the Republic of Turkey, The Honorable Abdullah Erol Aydin; and the General Manager of Turkish Airlines in Tokyo Mr. Mustafa Dokmetas. His Excellency Ambassador Dr. Fatimie held friendly and enthusiastic conversations with senior officials from various countries to discuss about common national interests, both economically and politically.
Posted by AEJ at 01:00