2019.29.08 Attendance at the Embassy of the Republic of Turkey for the Turkish Victory Day Reception 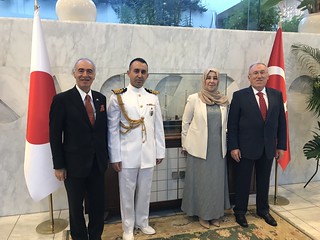 August 29, 2019: It was an honor for H.E. Ambassador Dr. Bashir Mohabbat to partake in and support the celebrations held at the Embassy of the Republic of Turkey for the Turkish Victory Day. 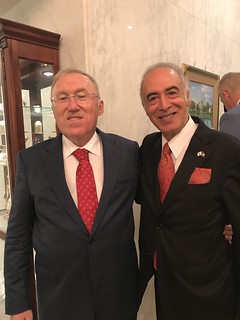 H.E. Ambassador Dr. Mohabbat expressed his congratulations to the Turkish people and Government in honor of this most auspicious occasion, on behalf of the people and the Government of the Islamic Republic of Afghanistan through H.E. Dr. Hasan Murat Mercan, Ambassador of the Republic of Turkey to Japan. In return, H.E. Dr. Mercan thanked H.E. Dr. Mohabbat for his kind words and support, while expressing his sincere hope to make more profound the very strong ties between their two countries. In response, H.E. DR. Mohabbat thanked H.E. Mr. Mercan for his kind words and spoke to the historically close and brotherly relationship between the two great nations while assuring him that he would also work to deepen and strengthen their close relations. While enjoying the event, H.E. Dr. Mohabat also had the pleasure of meeting with several of Their Excellencies the Ambassadors and members of diplomatic missions stationed in Tokyo, high ranking members of Parliament, and important Turkish representatives present in honor of the occasion.