Attendance at the 74th A-Bomb Anniversary in Hiroshima. 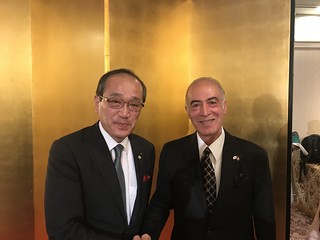 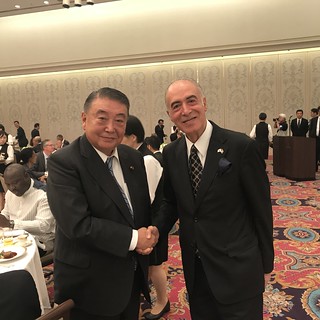 The evening before the anniversary ceremony, H.E. Ambassador Dr. Mohabbat attended the dinner hosted by the city of Hiroshima where he had the pleasure to meet Hon. Mr. Kazumi Matsui, Mayor of Hiroshima City, to whom H.E. Dr. Mohabbat thanked for the invitation to the event and, on behalf of the people and Government of the Islamic Republic of Afghanistan, expressed most profound and sincerest condolences and sorrow to the people of Hiroshima through Hon. Mayor Matsui on the somber anniversary occasion. Further he expressed the wishes of every Afghan joined the world in hoping the tragedy would never occur again but forever be an inspiration for the necessity of peace. In return, Hon. Mr. Matsui expressed his deepest gratitude to Dr. Mohabbat for his kindhearted words and thanked him for attending. 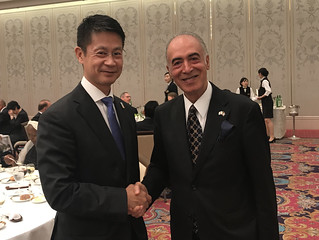 Dr. Mohabbat also had the pleasure to meet Hon. Mr. Tadamori Oshima, Speaker of the House of Representatives, and Hon. Mr. Hidehiko Yuzaki, Governor of Hiroshima, to whom he expressed, on the behalf of the people and the Government of the Islamic Republic of Afghanistan, the some sincere gratitude for the steadfast and benevolent support Japan has given over the years; the essential role in further developing Afghanistan, allowing it to strive for progress, prosperity, and peace in an Afghan-owned and Afghan-led process.
During the ceremony on the day of the 6th of August, H.E. Dr. Mohabbat had the chance to express his remorse for the most horrific day during a minute of silence to remember the victims of the Hiroshima atomic bomb attack. While at the event, H.E.Dr. Mohabbat had the opportunity to further meet and discuss topics about peace with others of Their Excellencies the Ambassadors, diplomats with missions in Japan, high ranking members of government, and other distinguished guests present in order to commemorate the somber memorial.

Attendance at the 74th A-Bomb Anniversary in Hiroshima.
Posted by AEJ at 16:37