August 29, 2019: It was a pleasure for H.E. Ambassador Dr. Bashir Mohabbat to host notable guests from the local community through the auspices of the organization Aza6Plus for an informative and celebratory Photo Exhibit, Bazaar, and “Lunch and Learn” honoring Afghanistan’s century of historic independence and perseverance, at the Maulana Jalaluddin Rumi Balkhi Hall of the Embassy of the Islamic Republic of Afghanistan in Tokyo. Also in attendance were Mr. Naqshband Haya, First Secretary; Mr. Nasrullah Rozbeh, Second Secretary; and all of the Embassy staff in order to greet the guests and welcome them to the event. 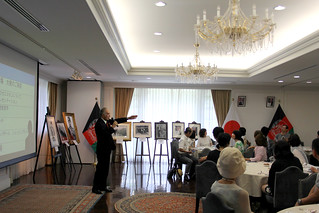 The emcee for the event, Mr. Ashraf Baburi, Administrative Affairs for the Embassy, welcomed all in attendance, and invited H.E. Ambassador Dr. Mohabbat to the podium to give his remarks on the occasion. H.E. Ambassador Dr. Mohabbat extended his welcome to all guests to the Embassy and on behalf of the people and Government of the Islamic Republic of Afghanistan thanked Japan for it steadfast and benevolent support over the years which has not only helped Afghans to live happier, healthier lives but also to achieve this notable milestone. 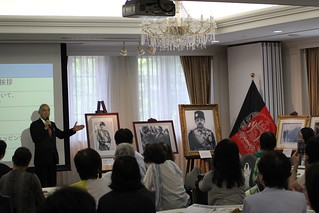 H.E. Dr. Mohabbat then took the time to introduce and explain the photos on display – some of the remarkable and notable leaders of Afghanistan who have paved the way towards a bright a promising future for every Afghan; beginning with His Royal Highness King Gazhi Amanullah Khan who began the restoration of independence in 1919, and through to today’s leaders H.E. Dr. Mohammad Ashraf Ghani, President of the Islamic Republic of Afghanistan, and H.E. Dr. Abdullah Abdullah, Chief Executive of the Islamic Republic of Afghanistan. 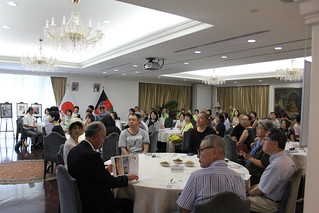 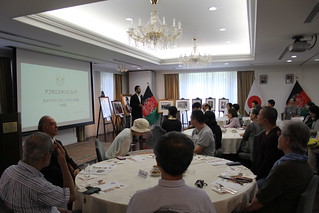 After the explanation of Afghanistan’s history over the past century of independence through photos, the guests were given a presentation on Afghanistan’s culture and contemporary heritage by Mr. Baburi following which they enjoyed a question and answer period. At the completion of the interactive presentation, the guests were given a tour of the Embassy which included a view of Tokyo’s city skyline from the roof which offers a unique vantage point of Tokyo Tower. 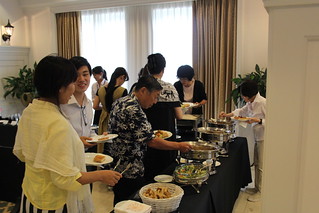 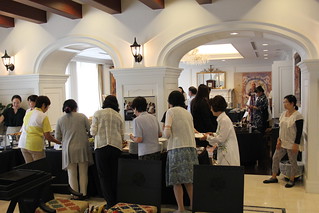 Following the Embassy tour, the guests were treated to a special celebratory lunch of various Afghan traditional foods carefully prepared by the embassy in honor of the occasion. At the completion of the meal, the guests were invited to peruse a small bazaar set-up with booths in which local Afghan-owned businesses in Japan displayed precious Afghan craft and artisanal items such as rugs, scarves, Afghan traditional clothing, Afghanistan sourced precious stone jewelry items, award winning Afghan saffron, and dried Afghan fruits and nuts for them to view, and inquire further about. During this time there were some raffle drawings for a few lucky guests to be able to take home some Afghan goods with them. All the notable guests who had been present to enjoy the photo exhibit, bazaar, and “lunch and learn” had a pleasurable time and remarked at how impressed they were with their new introduction to the wonders of Afghanistan and its remarkable history over the past 100 years; wishing it another wonderful 100 years. 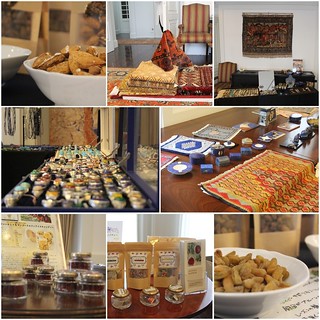