2019.08.08 Hosted Lunch Meeting with Official from the Middle Eastern and African Affairs Bureau of Ministry of Foreign Affairs Japan, at the Embassy. 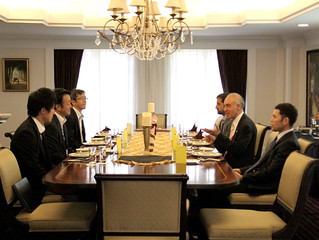 H.E. Mr. Takahashi thanked H.E. Ambassador Dr. Mohabbat and the diplomats for greeting them and for making the time in their busy schedules to meet with their Bureau and for hosting the delicious lunch. On behalf of the people and Government of the Islamic Republic of Afghanistan, H.E. Dr. Mohabbat once again congratulated H.E. Mr. Takahashi on his recent appointment as Director General, and Mr. Hatanaka as Assistant Director, wishing them the best of successes during their respective tenures. Moreover, he expressed wholehearted gratitude to the people and Government of the noble nation of Japan for their continuous benevolent support of Afghanistan as it has striven over the years for progress, prosperity, and peace in an Afghan-owned and Afghan-led process.
In return, H.E. Mr. Takahashi thanked H.E. Dr. Mohabbat for meeting with him as well as for his kind words. At this time, H.E. Dr. Mohabbat updated them on the many developments in the peace process Afghanistan has undertaken recently in order to advance regional stability and global peace as well as the upcoming Presidential election. H.E. Mr. Takahashi was quite impressed with the progress being made in the Afghan-owned and Afghan-led peace process and reassured him that Japan values its strong and friendly bilateral tie with Afghanistan and as such would continue to stand with Afghanistan well into the future. All those present further discussed topics of mutual interest regarding peace, economics, and Afghanistan’s upcoming 100th year of Independence on August 19th.

Hosted Lunch Meeting with Official from the Middle Eastern and African Affairs Bureau of Ministry of Foreign Affairs Japan, at the Embassy.
Posted by AEJ at 16:38