2018.21.11 Attendance at the 48th National Day of the Sultanate of Oman Reception

Attendance at the 48th National Day of the Sultanate of Oman Reception. 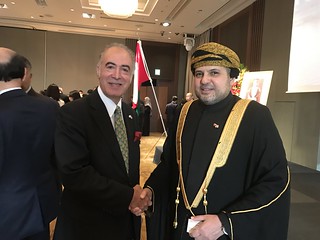 November 21, 2018: His Excellency Ambassador Dr. Bashir Mohabbat had the pleasure of attending the reception on the occasion of the 48th National Day of the Sultanate of Oman at the Palace Hotel Tokyo.
H.E. Ambassador Dr. Mohabbat extended his best wishes on this auspicious day to Mr. Mana Said Omar Al-Kathiri, Chargé d’affaires ad interim of Oman to Japan. He further expressed his hopes to strengthen and deepen the relations between their respective countries. In return, Mr. Al-Kathiri expressed his appreciation to H.E. Dr. Mohabbat for the kind words and attendance at the celebration, as well as agreed to endeavor to maintain and strengthen positive relations between Oman and Afghanistan.
H.E. Dr. Mohabbat also had the pleasure of meeting the new Ambassador-Designate of Oman to Japan, Mr. Mohamed Said Khalifi Al-Busaidi, whom he greeted and wished all the best as he began the steps towards becoming Ambassador Extraordinary and Plenipotentiary,as well as great successes during his tenure. In return, Mr. Al-Busaidi thanked H.E. Dr. Mohabbat for his kind words and assured him that he would work together with him to build even stronger relations between their countries. Additionally he had the pleasure of meeting with several others of Their Excellencies the Ambassadors with missions in Japan, many diplomats, members of Parliament, and other distinguished guests all present in honor of the occasion.