2018.07.11 Reception on the Occasion of the 99th National Day of the Islamic Republic of Afghanistan 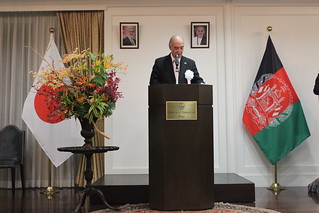 November 7, 2018: His Excellency Ambassador Dr. Bashir Mohabbat had the honor and pleasure of hosting the Reception on the Occasion of the 99th National Day of the Islamic Republic of Afghanistan at the Embassy of Afghanistan in Tokyo, Japan. 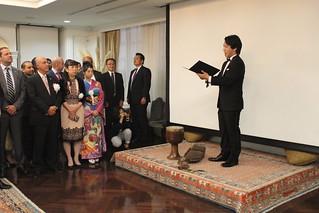 More than 300 guests were received by the embassy into the autumnal decorated Rumi Balkhi Hall to celebrate this auspicious event. Following the arrival of guests, Mr. Asif Agah, Second Secretary, began the night with a welcome address and invited Tokyo University of the Arts’ Master Student Mr. Tamon Inoue, Baritone singer with the New National Theater of Tokyo for Opera, to the main stage to sing the of the national anthems of Afghanistan and Japan. H.E. Dr. Mohabbat then gave Opening Remarks wherein he welcomed all the guests with a poem by Afghan born poet Maulana Jalaluddin Rumi Balkhi. Additionally, H.E. Dr. Mohabbat took the opportunity to highlight all of the progress Afghanistan and the National Unity Government have made over the past year in the realms of democratic elections; economic growth as recognized by the World Bank; agricultural enhancements to address self-sufficiency and draught; inauguration of regional partnerships such as TAPI, the many Air Cargo Corridors, The Lapis Lazuli Corridor to eliminate economic and transit dependency; and the progressive momentum of the peace building processes of the second Kabul Process, Tashkent Conference, and the upcoming Geneva Ministerial Conference on Afghanistan. Further he expressed his sincere gratitude, on behalf of the people and Government of Afghanistan, to all the international participants who have aided in the support of the Afghan-owned and Afghan-led development processes. 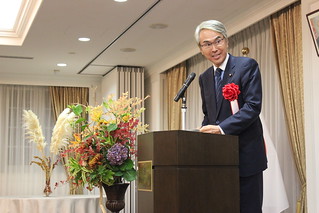 Remarks were also given by longtime friend of Afghanistan and the embassy, His Excellency Mr. Nobuteru Ishihara, the Chairman of the Parliamentary League of Japan, E.U., France, the Philippines, and Palau, former Minister of Economic Revitalization, former Minister in charge of Total Reform of Social Security and Tax, former Minister of State for Economic and Fiscal Policy, member of the House of Representatives in Japan; who remarked on the many progressive steps Afghanistan has accomplished in the past year and the determination of the Afghan people. 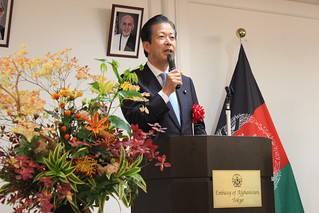 Another longtime friend of Afghanistan and the embassy, H.E. Mr. Natsuo Yamaguchi, Chief Representative of the Komei Party, also gave remarks praising the treasured and long lasting relations between Afghanistan and Japan, reavowing Japan's commitment to stand with Afghanistan through its further development, and his sincerest hopes for increased relations. 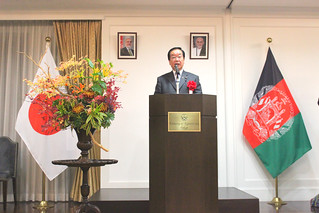 This was followed by remarks from H.E. Mr. Hiromichi Watanabe, Minister for Reconstruction of Japan, who expressed his congratulations for the reconstruction developments Afghanistan has made over the years and his certainty that Japan would continue to stand by Afghanistan. 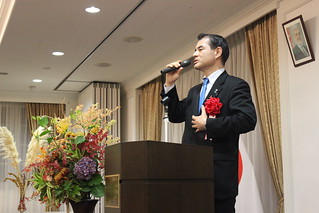 H.E. Mr. Masahiko Shibayama, Minister of Education, Culture, Sports, Science and Technology, also gave remarks speaking of the close and friendly relations between Afghanistan and Japan and the hopes for the ministry under his tenure to continue lending support and aid in development to the Afghan people and society. 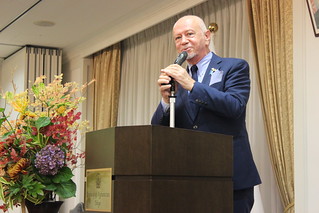 Closing remarks were given by the charismatic H.E. Mr. Manlio Cadelo, Ambassador of the Republic of San Marino and Dean of the Diplomatic Corps in Japan who extended his heartfelt congratulations to the people and Government of Afghanistan on the wonderful milestone, commended the many accomplishments of the Afghan people which showed their determination, and wished them all the best and continued successes into the future. 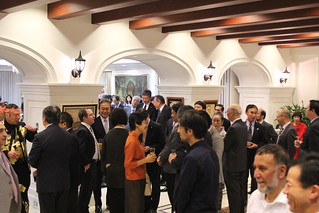 After the closing of the opening ceremony, traditional Afghan food and soft beverages were served while the guests were treated to the sounds of Internationally performing Afghan-Fusion Japanese musical group, "Chalpasah". Among the guest were over 90 of Their Excellencies the Ambassadors & Diplomats with missions in Japan, high ranking members of Japanese Government, business representatives, community leaders, representatives from NGOs and the private sector, Afghan nationals living in Japan, as well as Afghan students completing their studies in Japan. H.E. Dr. Mohabbat as well as the Embassy's own Diplomats and Staff had the pleasure of meeting and talking with their honored guests, and thanking them all for their attendance. 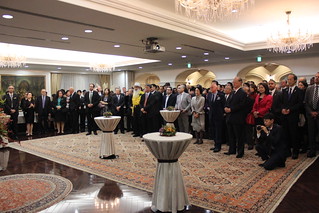 To read all of H.E. Dr. Mohabbat’s speech from the night, click the link.