2018.08.11 Attendance of the 60th Anniversary of the Establishment of JETRO

Attendance of the 60th Anniversary of the Establishment of JETRO. 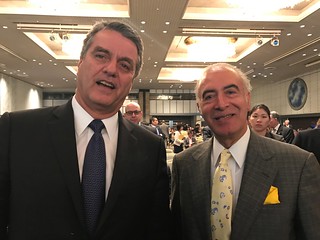 November 8, 2018: His Excellency Ambassador Dr. Bashir Mohabbat attended the 60th Anniversary of JETRO’s Establishment at Hotel New Otani . Also in attendance was Mr. Rahim Azimi, First Secretary for the Embassy of the Islamic Republic of Afghanistan. 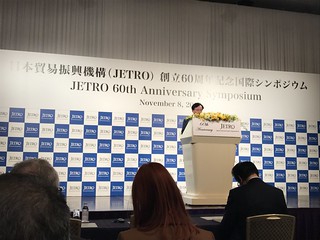 During the grand ceremony, His Excellency Mr. Hiroyuki Ishige, Chairman and CEO of Japan External Trade Organization (JETRO), Mr. Yasushi Akahoshi, President; and Mr. Kazuhiko Obama, the Senior Director for Global Strategy Southwest Asia Planning Department of JETRO all gave remarks on the many developments and achievements of JETRO over the years and their hopes for its future. 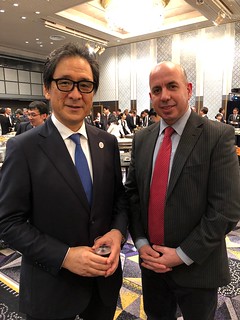 H.E. Dr. Mohabbat had the opportunity to meet with H.E. Mr. Roberto Azevêdo, Director-General of the World Trade Organization to whom he expressed greetings and sincere appreciation on behalf of the people and Government of the Islamic Republic of Afghanistan for their assistance over the years as well as discussed with him potential commercial and economic opportunities between Afghanistan and Japan that could be accomplished with further interest by WTO and enhanced trade and investment in Afghanistan. H.E. Dr. Mohabbat also had the pleasure of meeting with several of Their Excellencies the Ambassadors, diplomats with mission in Japan, and members of government all present for the occasion.