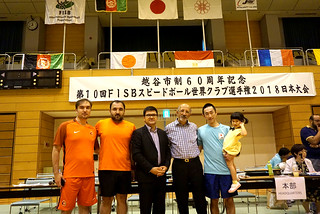 Jun 30, 2018: Mr. Asif Agah, Second Secretary of the Embassy of Afghanistan in Japan, had the great pleasure to attend the 10th anniversary of the Japan Tournament FISB Speedball World Club Championship 2018. The event was held at the Koshigaya City Gymnasium, in Saitama, Japan.


While at the event, Mr. Agah had the opportunity to engage with Afghanistan and other represented athletes in the Speedball profession. Mr. Agah had the pleasure to meet with Mr. Zabihullah Karimullah and Mr. Rafiullah Karim, both of which are Afghanistan players of the Speedball sport and participating members of the tournament. Mr. Agah thanked both Mr. Karimullah and Mr. Karim for their earnest work in the tournament and deeply appreciated the positive impact they have in representing Afghanistan here in Japan. Mr. Karimullah and Mr. Karim returned their gratitude to Mr. Agah and thanked him for the kind words and promised to continue to create positive relationships with competing countries, preserving the high standard of sportsmanship that Afghanistan athletes strive to maintain. They further discussed topics of mutual interest.