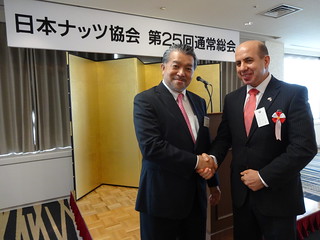 June 22, 2018: It was an honor and pleasure for Dr. Azimi, First Secretary, to attend the 25th Annual Convention and Reception hosted by the Japan Nut Association at the invitation of Mr. Hiroto Nakajima, Chairman of the Japan Nuts Association, at Tokai University Alumni Hall in Tokyo, Japan. Also in attendance was Ms. Imanishi, Assistant for Economic and Commercial Affairs.
The reception following the Convention provided networking opportunities for its members that are engaged in the nut and dried fruits business in Japan to meet and exchange information on current and future prospects in the industry. Furthermore, Dr. Azimi had the pleasure of meeting and speaking with Hon. Mr. Nakajima, Chairman of the Japan Nut Association, to whom he expressed his heartfelt thanks for hosting the convention and establishing the networking exchange between members of the Japan Nut Association and countries participating in the industry. In return, Mr. Nakajima thanked Dr. Azimi for his kind words and expressed his sincerest hope that their two countries, Afghanistan and Japan, continue to strengthen their relations both culturally and economically and for a prosperous future in this industry.
Additionally, he had the honor of meeting and speaking with several distinguished guests from Embassies of the countries exporting nuts and dry fruits, media specialized in the food industry, Japan External Trade Organization (JETRO) and others related to the industry that was participating in the reception to meet the members of the association.