H.E. Ambassador Dr. Fatimie had the pleasure to attend the “Discover a New Side of Hiroshima” seminar held at the Ikura House. The event to which more than a hundred ambassadors and several high-ranking Japanese officials assisted was a beautiful example of how a modern and developed state can gather the different stratums of its political division in order to promote a praiseworthy objective which is war recovery and peace promotion.

It is in that way that H.E. Ambassador Dr. Fatimie discussed with Mr. Hidehiko Yuzaki, Governor of Hiroshima Prefecture, and Mr. Kazumi Matsui, Mayor of the City, applauding their continuous work for the development of Hiroshima.

H.E. Ambassador Dr. Fatimie also had the opportunity to congratulate H.E. Minister of Foreign Affairs Fumio Kishida - who was born in Hiroshima – for his impressive speech. H.E. Minister Mr. Kishida wished stability, prosperity and peace for Afghanistan and mentioned its cooperation for peace promotion. 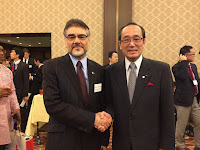 This is a remark Afghan people will appreciate because, as it has been the case for Hiroshima, Afghanistan is too often reduced to recent historical facts. Thus, Hiroshima as a center of peace promotion in the entire world is an example for Afghanistan whose people wants peace and development, and whose National Unity Government works to achieve this objective.
Posted by AEJ at 01:00