H.E. Ambassador Dr. Fatimie attended with great interest a seminar organized under Japanese MOFA’s aegis called “Public Seminar on the Middle East - International Effort towards the Stability and Prosperity of the Middle East, including counter-terrorism efforts”.
Contrary to a common misconception, Afghanistan is not a Middle East country. However, Afghanistan has very strong historic ties with the region and also faces a very complex security challenge. Nevertheless, the Government and the People of Afghanistan are absolutely not to be resigned. National security shall be restored and it has been proven how much international cooperation was precious to go further on the path towards this imperious objective. 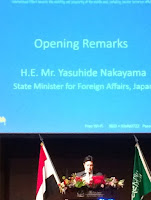