3/07/2015 H.E. Ambassador Dr. Fatimie Attends the Celebration of the Independence of the United States of America at the Tokyo American Club 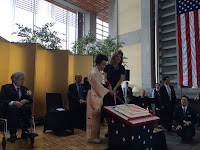 The presence of Their Imperial Highnesses Prince and Princess Hitachi particularly reinforced the exceptional nature of the reception as the United States of America and Japan are both crucial actors of Afghanistan’s recovery.