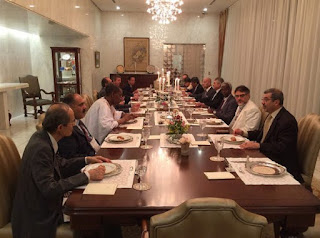 Along with wonderful meal, strong brotherhood interaction between both nations and their bright future were mentioned. H.E. Ambassador Meriç also assured that Turkey will continue to support Afghanistan as a brother country.


In response, H.E. Ambassador Dr. Fatimie, on behalf of the People and Government of Afghanistan, deeply expressed his gratitude for Turkey to support the reconstruction of Afghanistan, especially through troops putting all their energy in order to improve safety and security in Afghanistan.
Posted by AEJ at 04:00